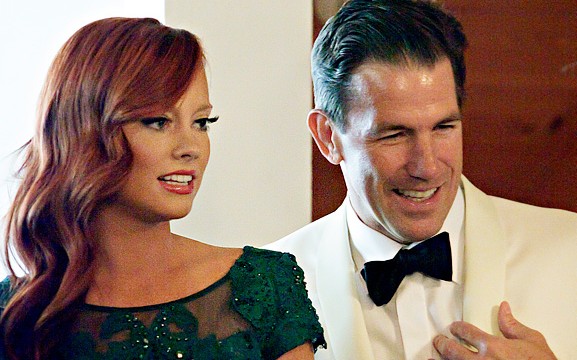 Bravo Southern Charm star and Independent U.S. Senate candidate Thomas Ravenel, 52 announced Sunday on Facebook that he and girlfriend and mother of his child Kathryn Dennis had broken up.

Ravenel’s relationship with the 22-year-old girlfriend became a major story line on the Bravo show in 2014.

The breakup came amid assault allegations made to the Charleston Police Department by Dennis’ friend and 32-year-old Moncks Corner stylist, Lauren Moser.

T-Rav claims that this is what led to their breakup and that Dennis valued being on Southern Charm and filming more than she valued clearing Thomas’ name, according to his Facebook post:

“When the allegations surfaced that I had assaulted Kathryn Dennis’ hairdresser, I pleaded with Kathryn to leave the Bravo shoot in Jekyll Island. They had even packed her bags and had lined up a driver. She told me she was coming to clear my name but then she backed out at the last second and delayed telling the truth by 1 an 1/2 days. $900k of my campaign money down the drain. The investigators even told me that if she would have come and corroborated the accuser’s story I would be cleared. The temptation of missing film time was a more a important value to her. So telling. Our relationship is over.”

Dennis replied on Twitter: “I’m doing what’s best for my daughter, and presently that is not being with Thomas.”

Last season on Southern Charm there was a lot of talk that Dennis was just using Thomas for fame.

The allegation by Moser claims that on Oct. 17 she and Dennis were sitting outside of a Charleston home when Ravenel arrived holding their daughter and yelling at Dennis. Ravenel then “slipped and fell into the pool with the baby” and handed her to Kathryn. Moser claimed in the report that she followed Thomas into the house when he slammed the door on her twice, hitting her knee and arm.

Ravenel claims the allegations are “without merit.”