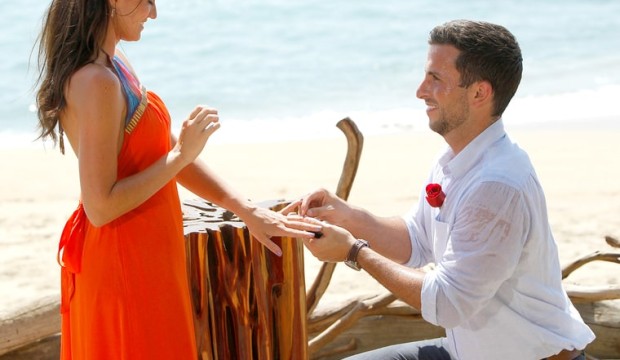 To be honest 29-year-old Jade Roper was the last person I thought would find a life partner on season 2 of Bachelor in Paradise–simply because I thought the former Playboy model had other reasons for being there…in fact I thought she would head straight over to SUR in West Hollywood and join the cast of Vanderpump Rules after the show, but no! Jade has chosen a much simpler life path with her BiP co-star and fiancee 28-year-old Tanner Tolbert.

The couple fell for one another right away when they met in early June of 2014 at the Playa Escondida Resort in Sayulita Mexico and surprisingly provided no drama on the show.

They were engaged on the finale filmed on June 24th and have been together ever since. In fact Jade recently moved to Kansas City, Missouri to be with her soon-to-be-husband.

The two announced via Bachelor Live yesterday, but did not give fans an exact date–just saying they would be married on television.

But today they have announced an official date…Valentine’s Day 2016!!

In fact the two are making some serious commitments.

“Adulting real hard today. Tanner and I just put a deposit down on a few acres to build our home together!” Jade captioned an Instagram photo on Sunday, January 10th.

“We don’t want a huge wedding, but he has a lot of important people that he wants to make sure are able to come,” Jade told Us Magazine last summer.

Although, come on…this is being paid for by ABC so you will see LOTS of Bachelor alumni and probably very few of their real friends and family members. I just hope ABC will spring for an open bar this time.

Jade also said, “I’ve wanted to get married under a willow tree,” …. “I’ve always, with an outdoor wedding, [wanted my dress to] be very soft and romantic, but obviously nothing too outrageous that you can’t wear outside.”

Awwwww, well I am sure Chris Harrison can make that happen.

BTW, I think it goes without saying, ordained minister Chris Harrison will officiate the nuptials.

What religion is Chris Harrison?