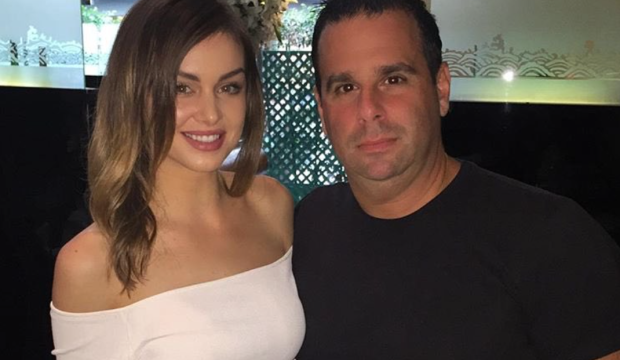 The mystery of Lala Kent’s married boyfriend keeps growing deeper. Lala’s co-stars have been adamant that she is dating a married man. Katie Maloney, Scheana Shay, Kristen Doute and Stassi Schroeder all insist that they have heard credible rumors that Lala is dating a very wealthy married man and is sleeping her way to fame and wealth. In fact Stassi claims the man’s wife discovered the affair when she discovered sexting videos of the two of them on his phone.

So earlier today Stassi posted this major clue as to the married man’s identity on Twitter, claiming his name is Randall: Looks like Stassi has had enough of Lala’s taunting and is now dropping names, first names at least.

So who is “Randall”?

Lala was recently cast in a Nicholas Cage movie called Arsenal. One of the producers on the film is 45-year-old Randall Emmett who is married to 28-year-old actress Ambyr Childers.

Rumors are swirling that this is the Sugar Daddy that bought Lala the Range Rover, the Jimmy Choo shoes, the apartment, et al.

One internet sleuther captured this piece of compelling evidence. Looks like the same T-shirt and bracelet from the picture below I got off of his wife’s Instagram.

And this one I found on Twitter with this curious claim from Guillermo Galvan which shows Lala and Randall out together. Lala has since deleted these photos.

Emmett’s wife Ambyr played Colby Chandler on All My Children and Ashley on Showtime’s hit drama Ray Donovan. The two have a daughter together, London Thea Emmett.

Here is a video of Amber from this summer around the time VP Rules was being filmed looking a bit somber.

Anyhow, Emmett is a very wealthy Executive Producer in Hollywood known for films like, Wonderland, A Love Song For Bobby Long, The Amityville Horror, King Of California, and Home Of The Brave.

He was born March 25, 1971 and raised in Miami, Florida. Emmett graduated from the performing arts high school, New World School of The Arts.

He then attended college in New York at The School of Visual Arts for film school with a major in producing.

Perhaps this is why Lala didn’t seem at all phased about leaving her lucrative gig on Vanderpump Rules.

In 1998 he founded Emmett/Furla Films now known as Emmett/Furla/Oasis Films/ EFO Films (after partnering with a company in Dubai). To date, his company has produced more than 80 films which have grossed in excess of $1,000,000,000 in box office ticket sales worldwide—an average of roughly $13,000,000 per film.

What is shocking to me is that I have never heard of this guy!

I’m always a little suspicious of guys this young that have achieved this much success–as in I think they are likely part of some bigger game/agenda and the Dubai investment definitely raises red flags in my opinion.

Another red flag in my opinion, is that his company has been sued for fraud and racketeering sort of suggesting to me that Randall may be more like a mafia boss than a movie Producer moving money from places like Dubai into the US or from the US to Dubai. Speaking of moving things to and from Dubai — what else gets moved back and forth from the US to Dubai? That’s right, very hot women, expensive women, usually actresses or models who want to make real money by selling a little of their sugar to wealthy oil tycoons in Dubai in secret, but that’s all speculation on my part—I have no idea if Randall or Lala have ever been involved in that. I’m just trying to connect some dots in my head.

Anyhow, Lala claims she is madly in love with her boyfriend, we just don’t know which boyfriend she means!–is she referring to Hayes Pullard or Randall or some other guy? I mean we know Lala really likes a big beefy steak and Emmett look much more like a canned ham to me. But like they say, there is no better aphrodisiac than power and this guy has power.

James Kennedy told Lisa Vanderpump (likely in a desperate effort to get back into her good graces) that Lala is whipped on the married guy and that he’s been a bit controlling in telling her where she can and can’t go, even claiming he “follows her”. He hints that the boyfriend told her she could not go to Sonoma, California for Ariana’s birthday.

Additionally, last week we learned that Lala was actually using “decoy boyfriends”–this had to be NFL player Hayes Pullard and this had to be why Lala offered to take Tom and Ariana to Florida to watch a football game and “meet him”. I’m sure Randall offered his plane in a desperate effort to pass off Hayes as her boyfriend. I know Hayes has a 2 million dollar contract but he’s not rich enough to charter a private jet on a regular basis!

This suggests that Randall will spend as much as he needs to in order to do some damage control.

Unfortunately for him sounds like the wife has already discovered the evidence and I noticed her Instagram page was pretty well scrubbed of photos of them together. Seriously what is most shocking is that his wife is not some 40-something frump. She’s a stunningly beautiful 20-something actress that could certainly give Lala a run for her money.

Anyhow, this has yet to be confirmed but the evidence is very seriously mounting!

UPDATE 1/17/2017: On Monday’s episode James Kennedy claims that Lala’s co-stars were forced to sign an NDA (non-disclosure agreement) to protect the married man’s identity, however when asked by Andy Cohen whether the boyfriend made them sign non-disclosure agreements in order to take part in his free Coachella trip, Tom and Ariana vehemently denied it.

Damn! This guy is powerful if he can strike the fear of God into the castmates. Stay tuned!

Stassi responds to Lala’s demands for an NDA

Who is Eden Sassoon’s famous mother?