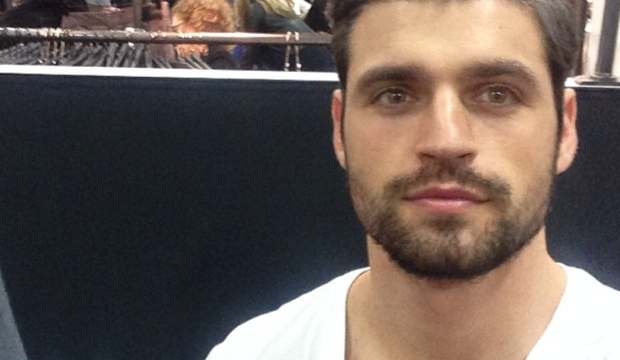 Thirty-one-year-old Peter Kraus is one young man you will meet when The Bachelorette premieres at the end of this month and I suspect the handsome model will be pretty popular with fans.

1. His Job: Peter Kraus is a mid-west boy from Madison, Wisconsin. He’s a Dietician/Personal Trainer and quite a successful model. In fact if he looks familiar, you may have seen on TV before. He stars on the ubiquitous Jos A Bank commercials, as well as in a number of print ads. 2. His family: His father is 59-year-old Gary Kraus, manager of a Panera bakery and restaurant on Fish Hatchery Road in Fitchburg, Wisconsin.

And his mom is 57-year-old Lynn Kraus, a travel agent with Middleton Travel. Lynn also works in the emergency room at Meriter Hospital.

He has an older brother named David Kraus that’s married and has a child and lives in Wayne, New Jersey.

3. He’s wanted to be The Bachelor since high school. Check out this little nugget from his high school yearbook. I suspect if he doesn’t get Rachel’s final rose he’s got a good chance of making that dream happen. 4. He has 4 tattoos. His family knot on his left shoulder, a cross on his right arm, Ironman on his ribs and, a buck on his chest. “My passion for fitness began early, playing baseball, soccer, basketball and football through my high school years. But at the age of 19 I developed an eating disorder while pursuing a modeling career, and my health and fitness began to rapidly decline. I realized that I hadn’t the slightest idea of what it meant to be truly fit or healthy, and in the winter of 2007 I hit rock bottom. So that spring I decided that it was time for a change and enrolled myself in the dietetics program at Madison College.”

I suspect we will get a good first date overshare circa Kacie B from Ben Flajnik’s season. ABC loves a good eating disorder overshare.

7. He’s completed three Ironman Triathlons, one of them with a broken foot. 9. He volunteers for the Make A Wish Foundation

10. He’s a Christian which will definitely be important to Rachel Lindsay who is also a Christian.

The Bachelorette premieres May 22nd on ABC.