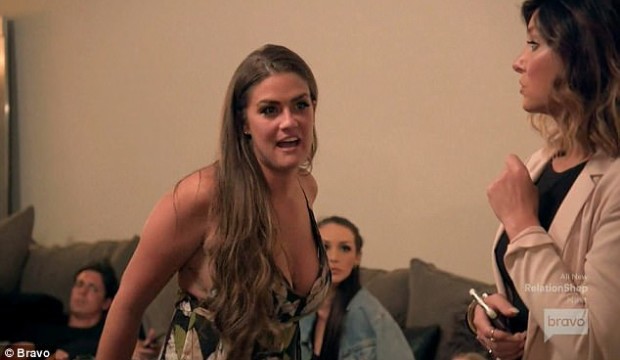 Faith Stowers has had very little air time on this season of Vanderpump Rules, but that doesn’t mean she hasn’t been shaking things up behind the scenes.

When the season began word came out that Faith, 28, had had sex with Jax Taylor, 38, and recorded him afterwards blasting his girlfriend Brittany Cartwright.

But Ariana dished some dirt on Faith shedding new light on the Jax Taylor sitch on Everything Iconic with Danny Pellegrino podcast, saying,

“It seems extra shady in that she was hooking up with Max [Todd].”

That’s rather interesting considering that Max is a secondary cast member, but the show never mentioned that Max and Faith were hooking up—perhaps Max’ powerful mother, show producer, Lisa Vanderpump, wanted to keep that under wraps. but I digress.

Anyhow, Ariana continues, “Then for a while there, she would talk about how she had a crush on Lala [Kent]. I don’t know if she did or didn’t, but it was thing that she was talking about and then all of a sudden it was kind of like not anymore.”

“The recording to me is super suspect because it literally is like tap, tap, put the phone down, ask questions, which to me seems calculated.”

Well of course it was! And the MO is simple…Faith wanted a nice 6 figure contract like the other members of the cast.

Faith has alleged that both Ariana and Scheana knew that she had sex with Jax and failed to tell Brittany. Ariana said, “She has been telling people that me and Scheana knew about all this stuff and we didn’t say anything.”

I’m not sure I believe that simply because no one in this cast knows how to keep a secret–especially a secret protecting Jax.

The host also inquired about the romance between her brother Jeremy Madix and Billie Lee. The two went on a date on the latest episode of Vanderpump Rules after Stassi and Kristen revealed that they felt creeped out by Jeremy. But Ariana was tight-lipped about her brother, just saying, “They’re very close. I don’t know what their status is. They’re not currently dating at this moment.”

When she asked, “Did they go on a date together” Ariana just laughed.

I guess we will have to wait for updates on the Jeremy and Billie Lee sitch.