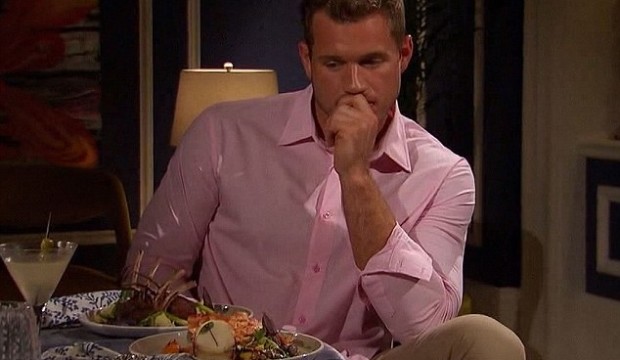 Twenty-six-year-old Bachelorette contestant Colton Underwood recently disclosed to Becca Kufrin that he’s still a virgin. A claim that Becca first appeared to disbelieve. She walked off, seemingly annoyed after the big bombshell, but then returned and coddled Colton for being so vulnerable with her.

I found the entire exchange very confusing and very suspect.

If he was unattractive, or previously 600lbs, or super socially challenged, I might believe it, but he’s way too cute and way too charming and way too worldly not to have taken a dip in the Lady Pond at this stage in the game.

The claim makes me think he is looking for a reason to ‘keep his jeans on’ in the Fantasy Suite. (For those of you who don’t recognize that reference, it’s what Robert Graham did to Sarah Herron on BiP in 2014.)

Am I accusing Colton of being a fraud?—a hustler, an opportunist, a status-seeker? Of course, I am. I didn’t like or trust Colton the minute I Googled his bio before he even set foot on that Bach Man driveway.

He is a 26-year-old multi-millionaire virgin with a philanthropic Foundation. Unfortunately, I know way too much about ‘Foundations’ and have yet to find one that is not just a giant money laundering scheme/tax shelter for the rich and entitled.

No wonder on his hometown in Colorado, he took Becca to a  children’s hospital to play with kids. Not that kids don’t need playmates, but the whole thing felt contrived and self-serving.

So this leads me to the conclusion that Colton is hiding something big, like being gay. Of course, that in itself is just fine, but him pretending to be looking for love with Becca is really not in my opinion.

And we know a little bit about his background. He aggressively pursued US gymnast Aly Raisman (right at the time that her popularity was skyrocketing) and the two briefly dated, breaking up after her 15 minutes as America’s sweetheart concluded.

And just look at the step-and-repeat pics of that couple—they are about as believable as Ryan Seacrest and Julianne Hough.

The relationship just seemed a little too ‘self-serving’ for Colton allowing him to maximize his air time.

He also allegedly dated Becca’s good friend, Tia Booth just before the season began. But again, he likely thought Tia would be the Bachelorette and wanted a head start on that hustle.

Fueling the gay conspiracy this week he told Kufrin that she was the first woman he’d brought home to meet his parents. SERIOUSLY!? You didn’t even bring home your Olympic gymnast GF to show her off????

And THEN the claim that no one in his family knows he’s a virgin! Really??? You are so guarded that you couldn’t tell a single family member, but you were ready and willing to share it with all of America?

In other words, I think his family knows darn well he is not a virgin and he needs to explain why they may have heard a different story should Becca or anyone ask.

Anyhow, I’m not remotely shocked that Becca sent Colton packing this week and I have to wonder if she came to the same conclusion that I did.

Either way, if he is gay, or just lying to make himself seem more interesting, he is a HUSTLER!

Look for Colton to get back together with Tia on Bachelor in Paradise…but not for long. Shockingly it doesn’t work out!