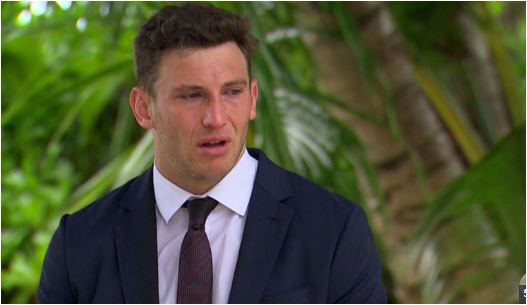 Lets be honest: the engagement of Bachelorette Becca Kufrin to Garrett Yrigoyen was pretty predictable. What wasn’t so predictable was Blake Horstmann’s emotional reaction to his break up with Becca.

But the writing appeared to be on the wall as soon as Blake met with Becca’s family tonight in the Maldives.

Blake opened up to her sister Emily about his love of independent women and his insecurities regarding Becca’s relationships with other men aka Garrett.

Blake is pretty clued in to sub-text which is a lot more than I can say for most male contestants, and he picks up on some subtle clues from Becca’s family that she has already chosen Garrett and they are really just there to help her with damage control…. not choosing a life-partner.

Rather than using their valuable time with Blake to ask him questions about him, they use the time to ask Blake how he will feel if Becca picks Garrett — hint, hint.

And even worse—if he has any concerns about Garrett! Aka–give us the dirt.

Of course this pre-emptive strike to help protect and comfort Blake and get dirt on Garrett understandably sends him into an emotional tailspin.

“She’s going to pick Garrett,” he astutely and tearfully remarks to cameras in his ITM.

Then the family tries to pretend like Becca has yet to make her decision and they make their case for each man.

On to the last dates….always a bit telling.

Becca’s date with Garrett consists of lots of opportunities for eye contact, time to cuddle, kiss and chat, while her date with Blake is like an Olympic event, aka little face to face time to talk and no eye contact: biking, paddleboarding and swimming across the tropical islands.

But despite picking up on some pretty clear clues, Blake has pulled himself together–aka producers must have convinced him behind the scenes that he still had a snowballs chance in hell to win this thing and so…..the crafting begins.

Blake presents Becca with a time capsule of photos and mementos from their 9-week relationship.

He is confidant enough to still choose an engagement ring.

Now I thought surely Becca would insist on dumping Blake gracefully in his hotel room to spare him the humiliation of the final rose ceremony, but I’m guessing producers got tired of the lady leads taking this easy road and halted their “no rules” policy.

And right on cue as Blake begins his proposal, Kufrin cuts him off and tells him she has chosen Garrett.

Blake heads off in the limo in tears lamenting to cameras about his confusion … and now we know why men need pocket squares!!

Thankfully host and armchair shoulder to cry on, Chris Harrison is never far behind. CBH sits down with Blake in a live studio audience to help him work through the pain.

The good news is that Blake’s very real, raw and not-trying-to-hard-to-be-the-next-Bachelor reaction will make him a shoe-win to be the next Bachelor over Jason Tartick.