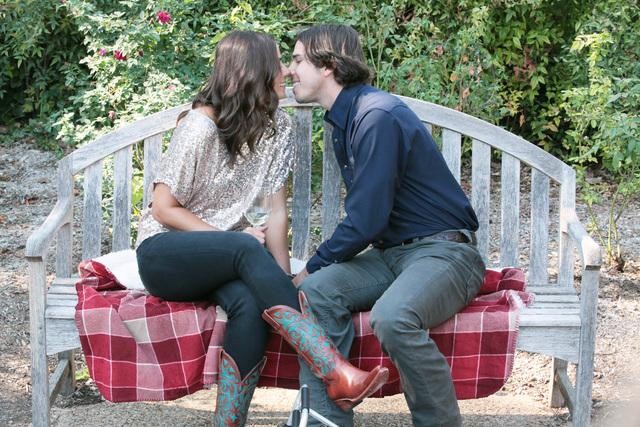 We finally got to see the long awaited hometown dates on Ben Flajnik’s season of The Bachelor. Hometowns are always a personal fave of mine because we get an insightful glimpse into the world of these amazing ladies.

As a side note, it’s always interesting to me that the ladies always emanate from such picturesque, idyllic home situations. Just once I’d like the Bachelor to go on a hometown where the amazing lady and her family are hoarders. Like, full on, bat shit crazy hoarders. With old pizzas and dusty books stacked all over the place. (Note: Kirk DeWindt’s hometown date on Ali Fedotowsky’s season was probably the closest we’ve come to a truly amazing hometown date…what with the collection of taxidermied beasts in his Dad’s basement. But, we digress…)

Unfortunately, Monday’s hometowns were business as usual for The Bachelor. We went to the homes of four ladies — all from affluent, loving families (yawn). And we learned some things about the four remaining ladies.

We learned that horses have been in Lindzi’s life “since before she was born.” We learned that her ex-boyfriend did a number on her. And we learned that her parents were surprisingly comfortable handing their daughter’s hand in marriage to a guy she met on a reality show…that lives on the other side of the country… and that she has been on approximately 2 dates with.

In other words, we learned that they are pretty cool people. And lest we forget, we also learned that although Lindzi’s Dad’s name is really John, he prefers to go by Harry. As in, Harry Cox. That’s Harry, followed by Cox. Not that John Cox is a surefire winner either, but…..moving on.

Kacie B’s hometown was quite a contrast to the smooth sailing Ben experienced with Lindzi. It’s no surprise that Kacie B. comes from a family that’s a bit less liberal. Kacie has always struck me as a tad bit uptight.

Not to diminish the magnitude of her eating disorder, but I just felt it wasn’t as big of a deal as she seemed to think it was, and it for sure didn’t need to be fully disclosed to Ben on their second date. So… Kacie takes us to her high school where she performs with the high school band, demonstrating her sultry baton twirling skills. But I think it also revealed how little time there’s between Kacie’s high school years and now. At 24, her biggest achievement in life (other than overcoming a one year bout of anorexia and bulemia, which was discovered at a Super Bowl party) has been baton twirling. Again….yawn.

Then…. we meet her dad, the hard-nosed probation officer and her mom (aka Judgy Judgerton), who apparently had not seen the show before, even thought she claimed she had, because she was concerned that Kacie and Ben, if engaged, would soon move in together and be living in sin prior to marriage.

Yet, anyone who watches the show knows the couples never actually make it to marriage and rarely even make it to the “after the rose ceremony.” No surprise that the dad was not OK giving his daughter away to a dude that was dating multiple other ladies and would be proposing after a mere 9 weeks.

And perhaps, more importantly, may be taking her to a “fantasy suite” on national TV. He actually gave the best advice any father on the show ever has by telling Ben if he wasn’t going to choose her in the end, to let her go now.

To be honest, Kacie B’s foul-mouthed meltdown in the limo was the most likeable I found her all season. I’m sure she’s gonna blame her dad for her early departure, but I dare say it was the eating disorder diatribe that did her in. No guy wants to hear about your eating disorder on date number two. Seriously. Next we meet Nicki’s family in Fort Worth Texas (who oddly are dead ringers for Kacie B’s family). We learned that Ben “loves Texas” and that he loves donning local garb as he shops for cowboy boots and a cowboy hat (see Ben in Puerto Rico in his Latin “swagger” gear and Ben in Belize in his tribal ware). But that’s about all we took from that hometown. At last we arrive at the hometown we have been waiting for all season!…Courtney Robertson. Yes, she has parents and they appear to be just as shallow as her.

Her father, a Joe Biden look alike, tells Ben “marriage is a 50/50 gamble…are you ready to make that bet?” Courtney confides in her sister that she and Ben skinny-dipped in Puerto Rico and the sister promptly shares this info with the family at their first family meal with Bachelor Ben.

Courtney then tricks Ben into a mock marriage ceremony where she directs him to write vows disclosing how much he worships and admires her.

Courtney then tricks the audience by displaying what appears to be emotions (but viewer beware, this is yet another side effect of what we believe to be a a pretty severe case of Borderline Personality Disorder).

In the end, Courtney once again hijacks the show with her narcissistic but entertaining antics and we are left trying to understand why Chris Harrison is nowhere to be found to warn Ben about this impending disastrous situation.