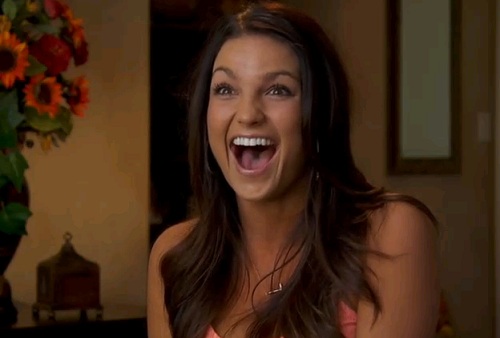 Fellow Sean Lowe suitor Catherine Giudici summed up The Tierra LiCausi Situation best when she coined the term “Tierrable” during last week’s episode of The Bachelor.

Tierra has quickly become this season’s number one fan un-favorite. And, for good reason. She’s even being compared to the likes of Bachelor Villainess Extraordinaire Courtney Robertson, Bachelor Ben Flajnik’s “winning” short-timer fiancee. I mean, that’s when you for sure know it’s a situation!! What I can’t wait for is tonight’s Tierra Drama to unfold because if the previews prove correct, it looks like she’s going to be showcasing the first-ever case of Bikini-Clad Hypothermia in Bachelor history. Smeared mascara and all. The things these amazing ladies will do for love!!

I have to admit that Tierra also frightens me because she keeps telling Sean she’s super emotional and attaches herself to people. And now, after last night’s episode, we know she attached herself (allegedly) to a since deceased addict of a boyfriend. That kind of situation ain’t no laughing matter, but it does throw some serious red flags in the whole finding your soul mate on national television race. The girl just needs to pause for a couple of beats and figure some stuff out it seems.

But – it does make for some amazing television. That’s for sure.