01 June 2013 by Penny Farthing in Best of Bachelor situations Best of Ok! Here is the Situation Reality Situations Bachelor Situations The Bachelorette: Desiree's Season - No Comments 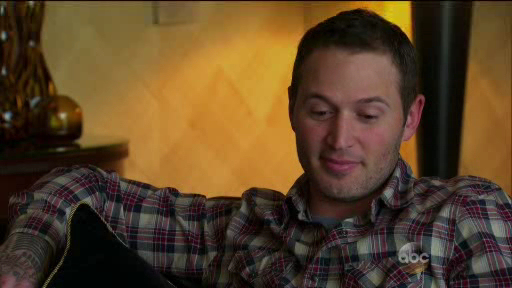 We decided we should probably weigh in on the Desiree Hartsock brother situation.

The first thing I noticed when I clicked through to follow him was, to my surprise, his mini Twitter bio, which simply reads: Evangelist/Missionary. Um, are we talking about the same Nate Hartsock that gave Sean Lowe a serious bro-down shake-down last season? Answer: Yes.

I found this info since we saw him on Sean’s season, he graduated from bible college. And, after graduation he moved to San Antonio, TX to “help American Idol’s Cristabel Clack and Cristabel’s husband, Pastor Brandon Clack, with the newly opened Living Waters Community Church. Their mission: Feed the hungry, take in the needy, and do what they can to make a difference in the world.”

This really throws all of my snap-judgments of him for a loop. And, as an enneagram Type 1, I really like my snap judgments.

Rumor has it that he not only appears in the final “meet the family” episode, but also in another earlier episode this season. We’ll just have to wait and see what kind of ‘tude he throws Desiree’s suitors way!

What is Desiree Hartsock Net Worth?