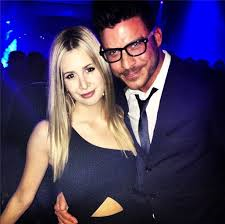 Ok, I am not one to print a story just based on a tweet (big pet peeve of mine) BUT, I have had a sneaking suspicion that Mr. Jax Taylor 23-year-old Carmen Dickman may rekindle things especially because it may be very important to the Season 3 Vanderpump Rules Bravo story line–WHAAAT?! you mean reality TV isn’t “real”?!–not exactly…sometimes it needs a little help…or a little “pump”…a Lisa Vander-“pump” and a few Bravo producers to create a little situational drama.

So I happened to notice a Ms. Carmen Dickman posted an intriguing tweet–just 2 words…

Of course she was quite upset with Jax when they first broke up a few weeks ago even saying she was glad she didn’t “get a tattoo” and the two parted ways on Twitter as well as in real life, but Carmen is now following Jax again.

Jax also posted that he was headed out to have drinks. So, this is mere speculation, but I have a hunch these two may try and reunite for the sake of the show, and they may actually like each other a little bit too.

We happen to know that Jax had been dating 28-year-old Tiffany Matthews, an Event and Logisitics Manager for the Hyde Bellagio in Las Vegas, Nevada since July and that the two were pretty serious but that may have just ended. I saw that Jax tweeted something about “no longer dating Tiffany”…but that they “were friends”, although I think he erased it right away.

BTW Did you notice how many trips Jax took to the Hyde Bellagio in Vegas?

An insider told us that Jax was getting a lot of pressure to from Bravo producers to end things with Tiffany and start things with Carmen. I will say that even though the relationship does look ‘arranged’ I think the two actually do or did like each other.

The insider claimed this:

“Lisa and Jax’s agent sit Jax down and stress to him that they need to find a replacement for Stassi and that he better have an interesting love story if there is going to be a season three.”

So knowing how key Carmen may be to the season 3 storyline I would not be shocked if the two give this relationship the ‘ol college try again….

2 thoughts on “Are Jax Taylor and Carmen Dickman back together?”