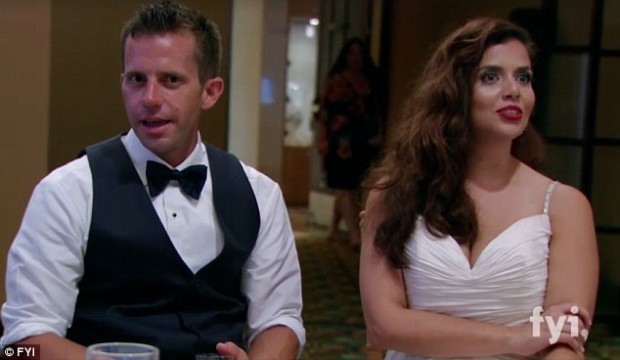 On Tuesday night’s episode of Married at First Sight Nick Pendergrast, 32, claimed he and his wife Sonia Granados, 33, never had sex and that they have only kissed.

But unfortunately for Nick, Sonia is not backing that claim. She says they had sex more than once—-not only that, but they had sex before the fight in which Nick said that he wasn’t attracted to her!

Needless-to-say you can imagine Nick’s lack of tack does not go down well.

In a preview clip for next week, Nick sits down with show expert Pastor Calvin Roberson to discuss why Sonia walked out on him.

Nick tells the Pastor that he was just trying to convey that his attraction level wasn’t where it needs to be to be married.

‘I think the only words she heard was, “I’m not attracted to you,” and then everything else was just, like, in one ear and out the other,’ he says.

Nicks tells the Pastor that they’ve slept in the same bed together and kissed, but insists: ‘We did not have sex.’

‘You’ve never had sex with her?’ Calvin asks? And Nick again denies it.

‘The attraction has dwindled from the beginning, and it’s not something that she’s done. I don’t think she’s ugly by any means,’ Nick explains. ‘We’re married, but do I feel like I’m a husband? I want to feel that way with someone.’

‘I get at least one “Get Out of Jail Free” card he tells the Pastor aka Nick is looking for an annulment. How am I supposed to support her emotionally if I don’t even know how to do that yet?’ Nick asks.

Pastor Calvin says he will talk with Sonia about how to move forward.

Nick again insists he wasn’t saying Sonia was ‘ugly by any means’.

But the damage has been done. Sonia says Nick’s words ‘really stung’. She then tells the Pastor that they have ‘been intimate’. Calvin tells her that Nick said they never consummated the relationship and only kissed.

But the experts are not giving up. Sexologist, Dr. Pepper Schwartz claims,

‘I don’t believe for one moment that Nick was not at all attracted to her or didn’t like her most of the time, but I think he was aggravated and lashed out inappropriately.’