Emily Maynard forgos the Fantasy Suites: Find out why 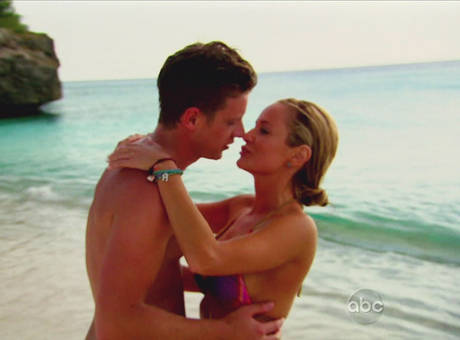 We’d actually heard some G-rated rumors leading up to this week’s big “overnight dates” episode that ABC took the fantasy suites off the table entirely out of respect for their leading single mom and the show’s generally conservative and sometimes overly judgey fan base. But, to our pleasant surprise, host Chris Harrison still busted out his now-classic hand-written notes for Emily and her top 3 dudes — asking them if they’d like to forgo their individual rooms and stay as a couple in the FANTASY SUITE.

We were not surprised, however, to see Emily decide to forgo the fantasy suite, and instead stay as an individual in her private room. In fact, here’s what she said about it all in her recent blog post on People.com:

“I swear I was anxious thinking about fantasy-suite dates even before agreeing to be on TheBachelorette. On the one hand, it’s great because you get that extra time to talk with the final three guys away from the cameras.

But on the flip side I know what “fantasy” is implying, and I’m not totally comfortable with that. I

also feel like my relationships have been so honest and real that there was really nothing they could have told me overnight that would’ve changed my mind.”

And, regarding her decision to not even “go there” AT ALL with contestant Arie Luyendyk, Jr, Emily said:

“As much as I would’ve loved to spend more time with Arie, it was best to call it a night. Like I said before, I’m so confident in my relationships that I knew a couple of hours off camera wasn’t going to change anything.”

Damn. I wanted to hear some more juicy details on how the fire between the two of them was too hot for her to handle! Haha.

Even though the “fantasy” element was partly removed from the suites, we were glad she at least opted to check out a couple of the rooms and — for the FIRST TIME this entire season — get into a freaking hot tub of steaming water with one of her guys — Sean Lowe. I mean, I know she’s a single mom, but we need more hot tubs and helicopters, ABC! This is The Bachelorette!

And, although contestant Jef Holm in his video note to Emily at the end of this week’s show said

something like “I can’t wait to watch 1,000 sunsets with you” (which, is just shy of 4 years buddy)…we are really rooting for Jef to be offered and to accept the FINAL ROSE during the big, upcoming season finale of The Bachelorette Season 8. And, for Jef and Emily to enjoy WAY MORE than 1,000 happy sunsets together.

Thank you, Jaime Lee Holm: She gave us (and Emily Maynard) Jef Holm