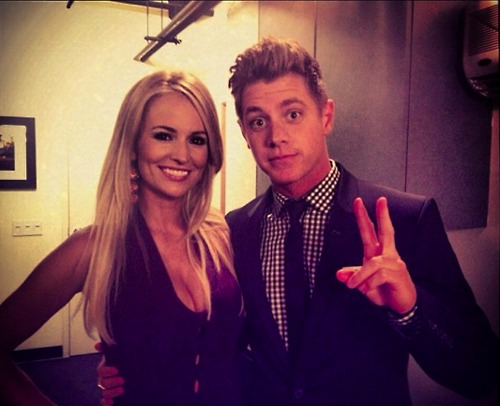 There is nothing we love more than top secret meetings between the winner and the lead of The Bachelor/ette that occur between production and the airing of the finale — especially when those meetings involve “handlers”, alias’ and people possibly dressed in shrubbery outfits hiding in bushes. I recall way back when — before Reality Steve — when we actually did not know who would win. There were just a handful of reports of potential sightings of winners and leads, like Bachelor Aaron Buerge and Helene Eksterowicz, from 2003, spotted having secret meetings between production and airing.

So despite the fact that pretty much everyone knew the winner this time, the two lovebirds, Emily Maynard (26) and Jef Holm (28),  managed to spend virtually every weekend together in a secret location — so secret they even changed their names! Apparently,“They told Ricki Jef was named Dean and Emily was ‘Dolly,’ as in Dolly Parton, so she wouldn’t slip and tell anyone who Emily was with,” he said. (Dolly Parton’s husband is named Dean in case any of you are not Dolly fans or are not up on your Dolly trivia).

Here is my favorite detail, “They sent us on a couple retreats around the country with basically the FBI following us around. We had handlers with us. We had to stay inside of the house,” Jef told Jimmy Kimmel. (It all seems a little silly since Reality Steve spilled the beans before the show even aired).

Nothing like super top secret meetings to make the two lovebirds even hotter for each other, though. And they even had “handlers”!!!! I love it when people have to have “handlers” to handle situations! This is super serious!

Well this is a truly amazing new detail. Hopefully the two shutterflies will continue to indulge us with details of secret meetings and appearances.

Apparently the two told Jimmy Kimmel Live on July 23 exactly how they were able to pull off these top secret rendezvous!