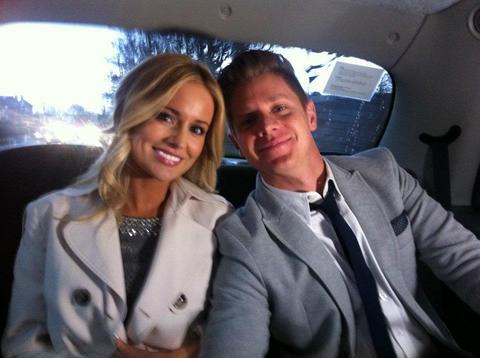 MAJOR SITUATION ALERT!!! It looks like a major sexting situation has gone down with happy couple Emily Maynard and Jef Holm. According to Us Weekly and Jef Holm’s brother Mike Holm, Emily was caught sexting another man while on vacation with Jef’s family at a beach house in Pawleys, Island, South Carolina. Jef allegedly discovered very explicit text messages and photos to and from another man  on her phone.

And while the tabloids are often wrong, this scandal was strangely confirmed by Jef’s brother. Mike Holm apparently even contacted US weekly after seeing the original “rumors” published on Wednesday to confirm the story was true (Wow! why does the Holm family want the world to know about the betrayal? That may be the real situation here.)

“I can tell you that it’s all 100% true. I was there and I heard the fight and watched the whole thing go down, Emily leaving and everything,” ….”I love my brother very much and, like the rest of our family, I just want him to be happy.”

Despite the big blow-out the two have been spotted together since the rumors and Jef even took to Twitter to lash out at his brother. He tweeted, “It’s crazy what people will do, even family members, to see their name in a magazine.”

I guess the real question is what is up with the Holm family? Usually even if rumors are true people shy away from airing their dirty laundry in the tabloids. So Mike Holm’s decision to contact US Weekly to give a statement confirming rumors is odd to say the least.

Fans absolutely adored Jef Holm this season of the Bachelorette (we even created our very own Jef Holm Dreamboat Fan Page). The 28-year-old sort-of Mormon, wealthy People Water co-founder almost seemed to good to be true.  He was apparently understandably shocked and totally devastated when he found the explicit text messages and photos–messages that led to an explosive fight between the two on the trip.

Just recently we were posting photos of the happy couple celebrating Jef’s 28th birthday in NYC and traveling to Ghana to check on People Water wells. So who is this other man and when did Emily find time to meet him? And why in the world did Jef Holm’s brother go to the tabloids?

Honestly, I was never sold on Emily as a sweet southern belle. I always saw her as a bit of a difficult diva that had some growing up to do, but I was also willing to give her the benefit of the doubt and was certainly rooting for her and Jef to “date so hard” and “marry the F@c% out of each other” (preferably on ABC).

Let’s hope the two can work the situation out.