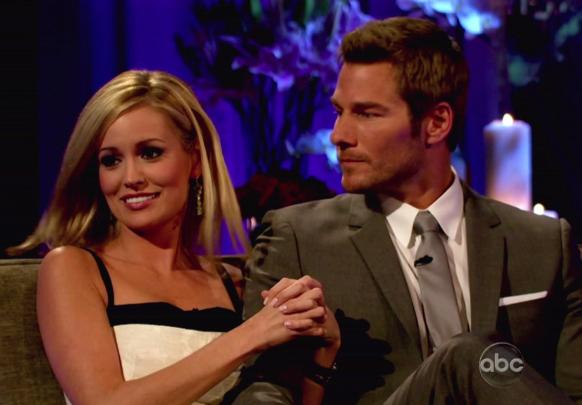 After Bachelor Brad Womack’s second season as The Bachelor wrapped, he and his winner/new fiance, Emily Maynard, remained in the spotlight for a couple of months, as they struggled to keep their relationship/engagement in tact.

When things fell apart, Brad completely disappeared from the media and he left the explaining about “what happened” completely up to Emily. As you’ll remember, Emily discussed her status with Brad in a heart-wrenching sit-down with Bachelor host Chris Harrison in July of last year:

Recently, timed perfectly with not only the opening of a new “Womack brothers” bar in Houston, but also with Emily’s Big Premiere as the Bachelorette, Brad finally….SAID SOMETHING to Houston’s KTRK:

The high/low-light from the interview? Hold on to your hats Bachelor/ette fans, because it’s a doozy:

Regarding the ending of his relationship with Emily, he said: “Can I say I’m glad. I think I dodged a bullet with the relationship? I just hope it works out with her.”

WOW! I mean, that is QUITE the juicy nugget to say about America’s latest (seemingly) sweetheart! Was Emily more of a bundle to take on than we’ve previously thought? Did Emily have as much to do with the breakup as Brad “Don’t Poke the Bear” Womack did? Or, is this fairly offensive comment simply a result of The Bear getting angry? Did The Bear get poked recently?

Then, today on Twitter, there was this light-hearted-yet-loaded exchange between Bachelor alum Ashley Spivey and Emily Maynard:

AshleySpivey: Really Brad Womack? – Saw this interview today and it really rubbed me the wrong way…. http://t.co/P79AGLl2 9:43am, May 17 from Tumblr

EmilyMaynard: @AshleySpivey im sure they accidentally cut off the part where he said it was a diamond encrusted bullet of course! 🙂 11:13am, May 17 from Twitter for iPhone

AshleySpivey: @EmilyMaynard Emily – you are the best. Say the words and you know I will go all redneck on his a$$ 😉

It’ll be interesting to watch Emily’s season of The Bachelorette unfold, to see if we’re able to see any cracks in her seemingly super sweet veneer.