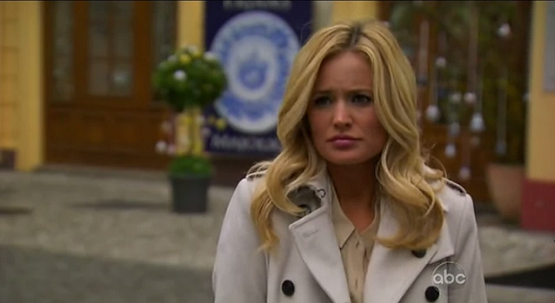 Tonight we finally get to see Emily confront Arie on his past relationship with show producer Cassie Lambert. Arie and Emily get a one-on-one in Prague this week where Emily had already apparently been told in private about the relationship. (BTW what an amazing breakdown of the situation by Chris Harrison! We love it when Chris Harrison has to go off-script and break down an unforseen situation!)

My suspicion is that Emily has to share a hotel room with the producer assigned to her and that ‘s why Cassie broke the situation down off-camera.

Emily is preoccupied with loyalty tonight as she has Arie rub the loyalty statue in Prague. (Sixes are already obsessed with loyalty so this revelation must have sent this six over the edge with anxiety).

The fact that Cassie is actually charged with selecting potential suitors for Emily obviously complicates the situation further. Emily can’t understand how Cassie could have hidden this important piece of information from her. We get an amazing producer-entering-the-frame-moment tonight as Cassie fixes Emily’s mic and films the conversation about the relationship. I love that Emily expressed that her feelings about the situation were “real”, “not show production”, since apparently the situation was not part of the intended storyline. (We don’t care we love it anyway).

Reality Steve apparently addressed the growing scandal during his live video blog last Sunday night and now, Wetpaint is contending  “Emily was shocked when she was told about Cassie and Arie’s history,” their Bachelor insider says. “She’s furious right now.”

“The sex stuff is especially upsetting. She’s not comfortable with the fact that this guy she’s started to fall for has already slept with her producer.” As we already know, things with Arie and Emily had been going so well, he had made it to the final four. This past weekend, Emily flew to Arizona to meet with Arie’s family during the home dates.

“Arie has definitely been a front-runner so far,” says the insider. “Emily’s developed serious feelings for him.”

“People assume it was this really intense, long-term relationship – but that’s not the case,” she says, adding that it’s “blown way out of proportion.”

Hopefully Emily will see past this minor faux paus and give Arie another chance!

Jef Holm opens up about his experience on 'The Bachelorette'