Why does Chris Harrison say: “you feel like … you’re betraying both of them” 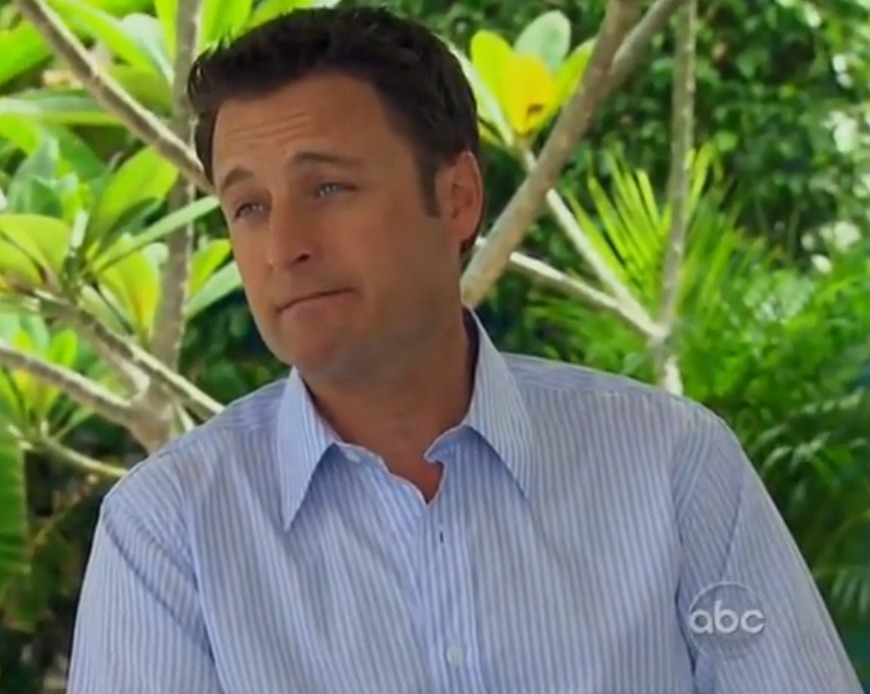 The promo for The Bachelorette Season 8 finale has some really amazing clips that suggest something serious is going to go down tonight. Emily is seen crying and devastated pre-rose ceremony. But my favorite quote is from Chris Harrison:

“You feel like at this point you’re betraying both of them.”

That was the quote that had me thinking she may actually get rejected by choice number one pre-ceremony and wrestle with whether to choose choice number two. I was pretty convinced this was a real possibility because what scenario would suggest she was “betraying both of them”.

But then I marinated in it as I often marinate in Bachelor/ette quotes in my leisure time and suddenly it hit me. “Both of them” was not referring to the two men. The quote was referring to her mom and dad most likely.

The promo really hypes things up, but it may be that she is quite certain of her choice — and he obviously says yes because Emily has been tweeting about her engagement party and has a $150,000 engagement ring!

Chris Harrison does claim “It’s the most dramatic television event of the summer.” And it definitely is for us.

Emily’s dad says “I don’t believe that you can love two people at once” (which may have nothing to do with Emily’s actual feelings for the two guys).

Emily says “I’m so confused. I don’t know where my heart is anymore” — which again could simply be referring to her parents urging her not to get engaged after dating someone for 9 weeks on a reality show or could just be production by ABC.

Emily’s mom’s says “I encourage you to wait on any kind of engagement.”

“Sounds like you know what you want to do and probably need to do today.”
This is when he says….
“You feel like at this point you’re betraying both of them.”

And then Emily is heard saying: “the hardest thing about today is actually saying the words ‘I don’t know anymore.”

Chris says…
“Well, your mind is made up here. You are done.”

But I love that nothing is 100% except the fact that she does get engaged and that Chris Harrison will be there as the warm-hearted shoulder to cry on to help negotiate this complex situation. We know she is engaged and if you have seen the Reality Steve spoilers you know to who, but you don’t exactly know if he was her first choice or not.

Vote in our poll: Who would you like to see as the next Bachelor?

Emily and Jef: PHOTOS from the Bachelorette Season 8 finale