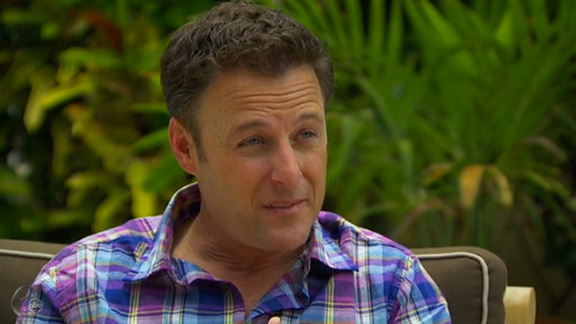 Chris attended Oklahoma City University on a soccer scholarship and then moved to sportscasting with a local  station.

Many Bachelor fans don’t realize that Chris also covered difficult news situations, including the 1995 tragedy at the Federal Building. He moved to L.A. in 1999 after an audition for a  horseracing network. Later that year, Harrison became host of HGTV’s “Designer’s Challenge.”

In 2001 he became host of the most amazing reality show ever The Bachelor and The  Bachelorette.

He will continue to host the Citrus Bowl Parade on ABC  stations in December.

In 2004 he hosted the Miss America Pageant for ABC.

He has appeared in:

“Alias,” “The Practice,” “Six Feet Under” and “Sabrina the  Teenage Witch.”

Feature film appearances include “Bounce,” “Showtime” and,  most recently, portraying himself in the comedy “Date Movie.”

Harrison plays soccer and golf. He was married to wife Gwen for 14 years, and has 2 kids, eight-year-old son Joshua and five-year-old daughter Taylor.
Please follow us on Twitter