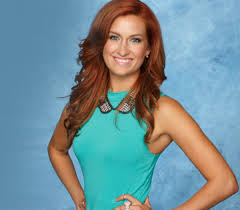 Lately we have heard a lot of claims that The Bachelor producers manipulate contestants in order to get a certain result–I know hard to believe right?

So after just ONE episode of Season 18 of “The Bachelor” one contestant aspiring model and artist Kylie Lewis is already claiming she was set-up.

Kylie Lewis was the bubbly 23-year-old redhead in the pink gown who Penny Farthing’s husband nicknamed “the mermaid” who was booted in the rose ceremony in an unprecedented kind of way. Kylie came forward to accept a rose after thinking she had heard her name. Yikes!

But now Kylie is blasting producers of the ABC dating show to TMZ.

She claims that they made her dye her hair from strawberry blonde to red and to wear a pink dress instead of a purple one and to send Juan Pablo a tweet right after they met.

She also claims that the producers “went out of their way” to show her rose mix-up.

“It’s been one episode, so I saw the same that you see—the special, the casting part, whenever they get out of the limo,” he told E! News‘ Catt Sadler and Ali Fedotowsky (who knows a thing or two about the process) when he stopped by our studio Wednesday.

Well, look, personally I thought Kylie was awesome despite looking like a mermaid. Juan Pablo doesn’t seem like the type of guy to get bent out of shape about hair or dress color. In fact Juan Pablo seemed like he was there to have fun and not to find a life-partner so I think Kylie should take heart knowing she did not miss out on a soul-mate connection.

Did Jax Taylor sleep with Shahs of Sunset star Golnesa aka GG?