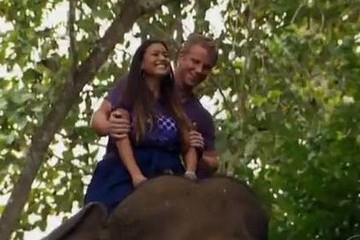 Sean Lowe and Catherine Giudici’s wedding ain’t gonna be cheap! I know, shocking! But in case you wanted to know how much this lavish wedding will cost the new issue of Life & Style, claims the price tag is:

The site is of course the Four Seasons Resort The Biltmore Santa Barbara situated between the Pacific Ocean and the Santa Ynez Mountains — not cheap.

According to our research: Total Cost Estimate for 45 guests on a Saturday night wedding and reception in May of 2011 at the Biltmore in Santa Barbara was $23,985 (food, flowers, dress, hair, DJ).

“We would’ve been foolish to say no to it.”–yeah especially since it’s on ABC’s dime!!!

The event will host 200 guests — including several alumns:

So thus far the Bachelor alumni invited and coming are as follows:
1:  Lesley Murphy.
2: Teen Dream Jef Holm
3: Desiree Hartsock and Chris Siegfried
4: Trista Rehn and Ryan Sutter
5: Ashley Hebert and J.P. Rosenbaum
6: Molly and Jason Mesnick
7: Arie Luyendyk, Jr
We obviously know Chris Harrison will be there. He will be hosting but not officiating.

Let’s hope ABC will pay for cocktails this time!!!

One of my fave details of Ashley Hebert and J.P. Rosenbaum wedding was how ABC totally cheaped out cocktails for the guests as soon as the cameras stopped rolling!!!

Neil Lane of course designed the wedding rings! a diamond-and-platinum eternity band for Catherine and a platinum ring for Sean.

How much are Sean Lowe and fiance Catherine Giudici getting paid for their wedding ?