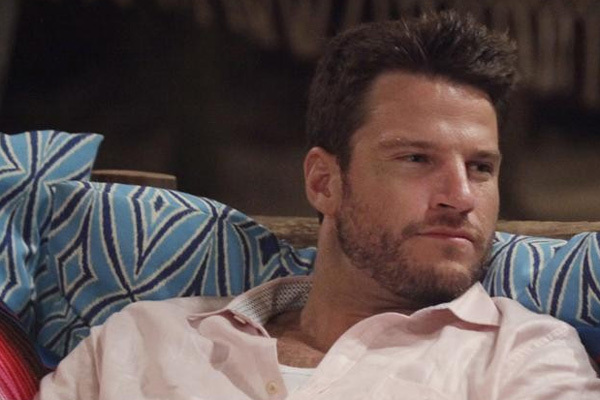 Thirty-two-year-old Monterey Winemaker Jesse Kovacs competed in Jillian Harris’ season of The Bachelorette (season 5) and in season 1 of Bachelor Pad. You may also remember his rocky romance with contestant Elizabeth Kitt on The Pad (Elizabeth Kitt is now married to Ty Brown BTW). Well he is back. He arrived in Mexico last week on Bachelor in Paradise and immediately started causing problems.

Jesse allegedly hooked up with both Lucy and Christy in Tulum Mexico. He also continued to reiterate that his strategy was just to “have fun”. Sort of shocking to see this d-bag side of Jesse. We met him in person a few years ago in his wine bar Blended Industries in La Jolla and he was very nice and in a committed relationship with his fashionista girlfriend Summer Albertsen. So this behavior of his seems odd and I will speculate that he may be fresh out of that relationship and not ready to start anything with anyone. So he has opted to play the role of douche-bag rather than to make himself vulnerable…but what do I know?

Anyway after Tuesday’s Bachelor in Paradise episode, Kovacs spoke to TV Download about what really went down in Tulum. His answers suggest to me that he had no interest in meeting anyone.

“Did you go into the show hoping anyone in particular would be there?

I had no idea who was going to be there. I didn’t have any idea about who I wanted to meet, because I’ve kind of been out of the Bachelor world for a while. (aka I am fresh out of a relationship).

The producers did call me and ask, would I prefer to see someone there? Who do I like? And I just said, “I honestly don’t have any idea.” I’m just going to show up open-minded, and if a relationship or a connection or a feeling is there then I’ll run with it, but I’m not going into it with preconceived notions about who I want to see.”

Were you aware that you had a reputation for being a playboy?

No, not at all. Again, I didn’t know any of these people, so to have a reputation with people you don’t know — it’s kind of weird… I was in a serious relationship for four years, so I don’t know how I got this playboy persona labeled on me.

(Yeah, I suspect he was not over his ex-girlfriend Summer and was acting out. In fact I see from Summer’s Instagram that she is head over heels for a new guy. This picture is from 4 weeks ago. I suspect the break-up was somewhat recent since the two were together for 4 years. It looks like she started dating this guy about 6 months ago. BiP started filming shortly after that.)

No that’s not – it’s not exactly how it went down, as I remember it, but there are probably some things I don’t quite remember.

But what happened was, there may have been some activity between myself and Lucy on the way back from our date. But then once we got back to the resort, we all kind of just separated, and I ended up sort of hooking up with Christy, and fell asleep in their hut. Christy and Lucy were sharing this hut, and I woke up at like 5:30 in the morning, and I literally opened my eyes, and Lucy’s face was like a couple inches away from mine. I kind of shook it off and stood up and grabbed my clothes and got out of there. The whole threesome thing, that didn’t happen.”

So as much as Jesse acted like a tool I would cut him some slack. I don’t think that was his real personality we saw. I would bet money he was seriously acting out after ending a 4 year relationship and watching his ex fall in love with someone else.

1 thought on “Was Jesse Kovacs looking for love on Bachelor in Paradise?”