08 September 2014 by Christine Lo in Uncategorized - No Comments 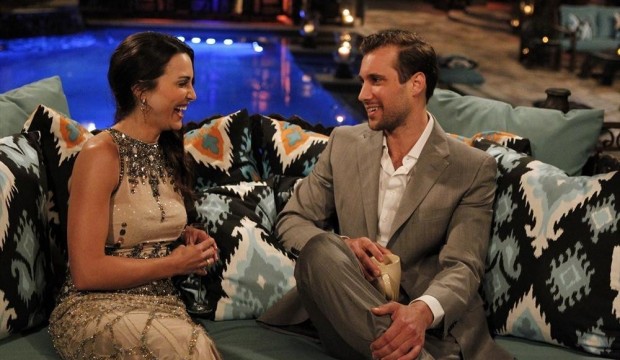 When Marcus arrived in paradise he seemed pretty unavailable. In fact it was just weeks after being booted by Bachelorette Andi Dorfman that he was shipped off to “paradise” for a second chance at love.

Marcus dropped the L bomb on Andi early on in the season during his 1-on-1 date with the Bachelorette. He was clearly whipped on the Bachelorette and was bummed when she let him go after hometowns. It was hard to imagine he would be ready to fall in love with anyone ever again let alone in a few weeks!

But on the Men Tell All episode filmed in July Marcus looked super tan and a little less than bummed after his 3 weeks in Tulum Mexico. Little did we all know that he had fallen in love and just proposed to someone when he went on MTA.

In a PEOPLE magazine article Marcus addressed getting over Andi and meeting someone new.

“Marcus, you entered Paradise just shortly after breaking up with Andi Dorfman on The Bachelorette. Did meeting Lacy put your feelings for Andi into perspective?
Marcus: I think you meet certain people in your life to make you a better person and to make you realize what you have before you. I came to an understanding why all these relationships in the past and the show with Andi didn’t work out. It all makes sense after meeting Lacy.”

PHEW!! Thank God it had a happy ending because I was so worried about Marcus and his abandonment issues after Andi broke his heart. Viva ABC!!!