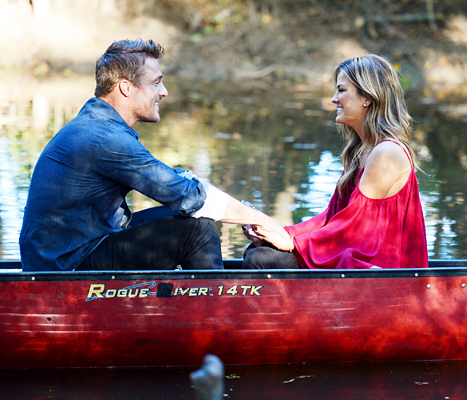 Monday night’s Fantasy Suites in Bali were intense. It was obvious that Chris Soules was having a very tough time deciding between Kaitlyn Bristowe, 30 and Becca Tilley, 26 at the rose ceremony. Adding to the complexity of the situation was the fact that Becca Tilley was a virgin! So Chris had the added pressure of figuring out if he was going to keep a virgin only to dump her and scar her for life in the end.

During the rose ceremony he pulls Becca aside to try and figure out how serious she was–I love an 11th hour rose ceremony decision situation.

He said this in his People blog on why he ultimately chose Becca Tilley in Bali over Kaitlyn Bristowe:

“I was really looking forward to my date with Becca because we’d really gotten closer in Iowa and I wanted to build on that. Spending the day with her in Bali’s countryside was incredible. The area we were in, Sidemen, oddly reminded me of home.”

Chris comments on the amazingly awkward advice they received from the medicine man on “what they should do that night?”—Answer: “make love”.

“Speaking to the local medicine man was a trip. I definitely liked the advice he had to give! ”

“That night, hearing from Becca that she thought the feelings she was having might be the feeling of falling in love made me really hopeful. I couldn’t help but tell her how I felt. I know what it feels like to be falling in love because I’ve been in love before, and I knew I was falling in love with her. When Becca said yes to the Fantasy Suite invitation, I was excited, but I could tell there was something on her mind.”…..

“I woke up the following morning in a raw, emotional state. I thought I would have more clarity about my relationship with Becca, but I was more confused than ever. On the one hand, Becca was saying she “thought” she was falling in love, but on the other, she said she was not ready to say that she could really see herself in Arlington.”

I think the fact that he chooses Becca after she says this shows how much he is in to her since his biggest fear is picking a girl who will not be happy there.

“When it came time to leave the fantasy suite we both had questions about our relationship so we thought it would be good to give ourselves some time to think and talk again before the rose ceremony. Unfortunately, the only opportunity I had to see her again was at the ceremony”—the time constraints of finding a life-partner-in-9-weeks can be challenging.

Wow! Talk about pressure! I could tell Chris really liked Becca, but that something had occurred in the Fantasy Suite to make him doubt how she felt about him. Like I said in an earlier post, Becca, like Chris is an enneagram 6. So both have a hard time making decisions and expressing their feelings—or even knowing what their feeling are! Chris took it to mean that she was not that in to him, but I am guessing a producer pulled Becca aside and said you better lay it down ASAP.