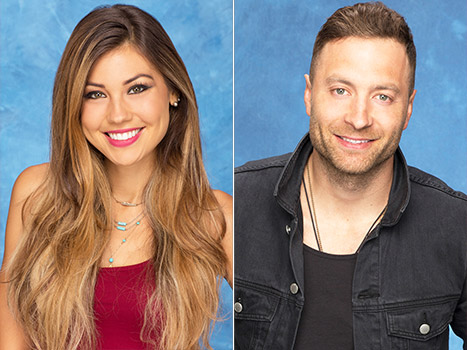 On part 2 of The Bachelorette premier Britt Nilsson, 27 is told that she will not be the lead and gets the boot from host Chris Harrison. She is understandably devastated.

Britt is hauled away in the limo to a nearby hotel room where she cries uncontrollably, but take heart…one of her favorite suitors, Nashville-based Christian singer-songwriter Brady Toops, 28 walks off and asks Chris if he can still go an pursue Britt during the rose ceremony.

I have to give Brady props for that because he could have easily been on the show just for fame and to promote his music career, but the fact that he was willing to walk off on night one to pursue Britt showed that he was there ‘for the right reasons’ and he did the right thing by leaving before the rose ceremony. It would have meant far less if Brady was eliminated and then pursued Britt.

On Jimmy Kimmel she admitted that she was disappointed she wasn’t chosen to date all those men but was very coy when questioned Brady.

“I guess Chris Harrison felt bad about having let me go, so, he gave Brady my [hotel room number],” Nilsson explains. “It is pretty smooth, it’s very gentlemanly. I thought it was sweet…He comes to my door and I was very surprised. It will be on the show next week.”

So are Britt and Brady still together?

Yes!!! — very much together and sneaking around the country to spend time together.

Thank God it was Brady who went after her and not Josh Seiter the male stripper or Ryan McDill banging on her door saying “I’m all horned up”. How uncomfortable would that have been? That woulda been a situation for sure!