Ben Higgins opens up about his ex-girlfriend Shaelin to Kaitlyn 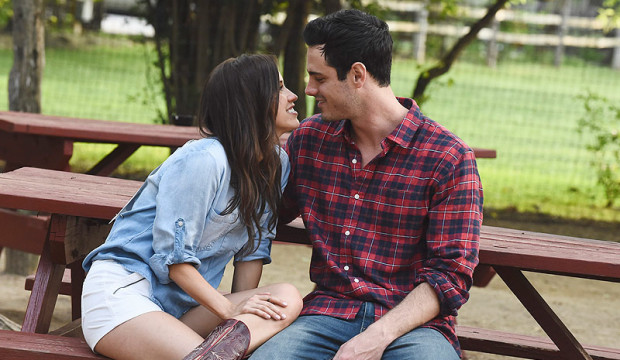 Tonight on Episode 5 of The Bachelorette and Kaitlyn and her men head to San Antonio, Texas and handsome 26-year-old Ben Higgins finally gets a 1 on 1. The two go two stepping at Gruene Hall. They fail badly at two-stepping, but still have a great time.

Afterwards they get to talk and Ben opens up about his ex-girlfriend Shaelin Jaid Adams whom he dated from 2012 to 2013.

We did a bit of research/stalking of their relationship trying to figure out what went wrong since it appeared that the two ended on great terms which led me to believe it was the distance that ended things since Ben moved to Denver and I believe Shaelin is back in Bloomington, Indiana after living in Texas for a brief stint.

Ben tells Kaitlyn his last relationship was long distance “from the beginning”, and when they broke up, his ex Shaelin told him … that he had “lost the chase” — that’s right, that’s it. It was very anti-climatic but I am not surprised their tweets are just way too sappy, sugary sweet. I am guessing there was not enough chemistry and way too many Christian side-hugs in the relationship. Ben Higgins and his ex-girlfriend Shaelin

In fact I kid you not in one tweet Ben refers to her as his “sissy” which I am pretty sure was a reference to their Christianity. I was in a very Christian church as a teen and we admittedly referred to our dates as “brothers” or “sisters”. Yep.

Anyhoo, Kaitlyn loves that Ben is making himself “vulnerable” with her but mentions his age (at the time of filming, March 31st he was 26) and asks if Ben is really ready for commitment. Ben says some stuff to convince her he is ready and he gets a rose.

I think Ben will make it far on his charm and good looks, but not all the way. I just can not see these two having much in common.