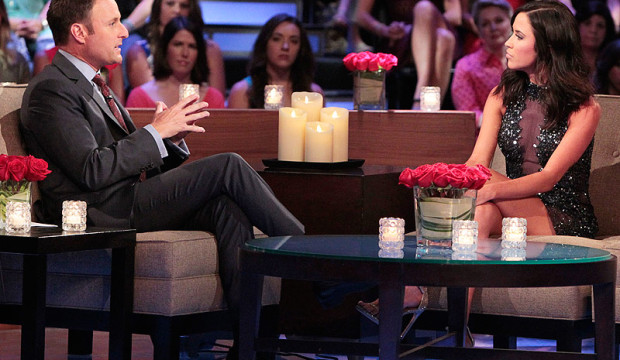 Last night on the Men Tell All former Bachelorette contestants were able to confront 30-year-old Kaitlyn Bristowe after learning the news that she and 34-year-old Nick Viall had a relationship before the show began. And although Kaitlyn and Nick had never met in person they had been engaged in some explicit sexting and some serious online FaceTime since she had been booted from Chris Soules season of The Bachelor.

Needless-to-say some of the guys felt duped when they watched the show and saw Kaitlyn make out with Nick on the Chelsea Pier before he had even officially joined the cast, and after they learned the reports that the two had serious feelings for each other prior to the filming of season 11.

Corey Stansell unleashed on Kaitlyn for not disclosing this information. He was eliminated the episode where Nick joined after the rap battle.

Ben Higgins asked Kaitlyn why she felt compelled to tell Shawn about having sex with Nick, but not him. He also told us the uncomfortable story of Kaitlyn sneaking away from her “handlers” to come to the hotel room that he shared with Shawn (ditching her mic–smart move) and crawling into the King size bed with Shawn. Ben was sleeping in a cot so one has to wonder if that destroyed his chances for some off-camera cuddling time–next time demand the King size bed Ben!

Anyhow, Kupah joined the list of guys angry that Kaitlyn did not disclose her relationship with Nick, although I think he ruined his cred when he was escorted out of the Bachelor mansion in the van of shame for launching into a tirade and refusing to leave when Kaitlyn booted him.

JJ Lane was surprisingly diplomatic and supportive of Kaitlyn despite the lack of disclosure on Nick and Kaitlyn admitted (or rather Chris Harrison admitted for Kaitlyn) JJ was a front-runner until his bromance with Clint Arlis proved to be a distraction.

Yes, some people criticized Kaitlyn online for sleeping with Nick so early, but the real issue for the guys was that the two actually had feelings for one another before the show. In the end the guys showed support for Kaitlyn despite feeling a bit duped.

Watch the Bachelorette season finale Next Monday at 8:00pm on ABC. Kaitlyn will make her final decision between Nick Viall and Shawn Booth.