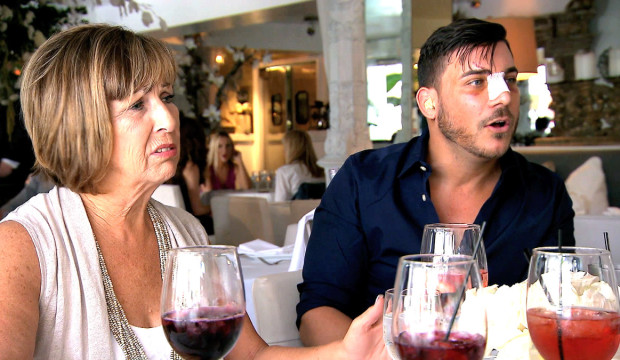 Season 4 of Vanderpump Rules premieres tonight and we FINALLY get to see the woman who gave birth to Mr. Jax Taylor. That’s right Jax Taylor’s mom Marie Cauchi, 60 will appear on the show.

Jax has been very tight-lipped about his family. In fact no one knew who they were or where they lived. We received some exclusive info on the family from an insider last year which BTW the “Google Answer Box” swiped with no attribution..so thanks a lot Google!–But I digress. Interesting that mom has had a change of heart isn’t it? It looks like Jax must have made amends with her. On the premiere mom says to her son: “I can’t wait to meet the young woman that actually you fall in love with her, and it’s going to happen if you just stop for a while and let it happen – you need to understand who you are and why you’re like that.”

Jax tells people to prepare for a “pretty intense season”. We know he will finally have a sit down with ex girlfriend Stassi after she refused to meet with him last season. I received a tip from an insider on that too which I don’t feel I can share at this point because it’s too “big” of an allegation. But if true then it makes sense why Stassi is so outraged at Jax.

Joelle Fletcher's brother Ben Patton was supposed to be 'The Bachelor'!