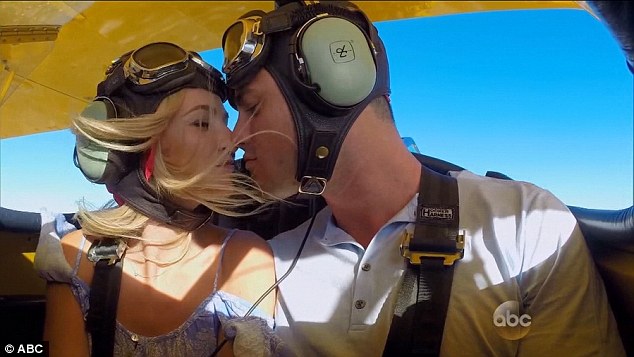 On Monday night 26-year-old Bachelor Ben Higgins had his first 1 on 1 with 25-year-old Alaska flight attendant Lauren Bushnell and it was clear that he was seriously in to her and vice versa. In fact you may even say it was love at first sight between these two.

In his PEOPLE blog Ben gushed about his very first impression of Lauren B.

“As the first limo pulled up into the driveway I quickly said a little prayer and thanked God for continuing to be with my on this constantly weird experience we call life. When that first door opened and Lauren B. got out, I knew she was there for me because wow! Just wow. She took my breath away but also just eased my nerves with how normal it was to meet her in such an abnormal circumstance. That helped a lot. ”

Ben took the flight attendant to where else?…the airport–to fly a bi-plane. It was obvious Ben was nervous but surprisingly so was Lauren. The two flew down the California coastline, but I’m not sure either one enjoyed the view. They were too busy awkwardly trying to circumnavigate their helmets and microphones to make-out.

In his blog Ben said,

“I got to go on a date with Lauren B! I was really excited to see more of Lauren B. because we really had a great connection on the first night. And at the second cocktail party too. But they were just glimpses. It was easy to see that she was not one of the more outgoing women in the house, but she intrigued me so much that I really wanted to know more. Plus an airplane date with a flight attendant? That seems too perfect a fit, right?”

I also love that Ben addressed the headsets in his blog.

“And once we got into the air, it was actually so much more calm and peaceful up there than I ever would’ve imagined. And having Lauren by my side really made it that much easier. She has such a wonderful energy about her not to mention she is just unbelievably beautiful. I mean, I know the scenery up there was unreal, but all I really wanted to do was look at her.

The most frustrating part about the whole thing though was the headsets! I wanted to kiss her so badly up there but those damn headsets kept getting in the way!”

The plane flies over the Bachelor mansion just to remind the other ladies that their boyfriend is out with someone else.

Then the two land in a field in the middle of nowhere and lo and behold there is a hot tub!!! We have seen the impromptu picnic appear as if from nowhere plenty of times, but the impromptu hot tub is a brand new situation! Thankfully the hot tub is fired up and ready to go. The two then get to enjoy making out sans the headsets.