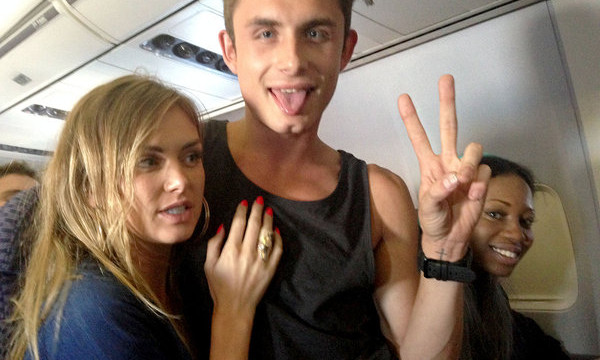 On Monday the cast of Vanderpump Rules on episode 12 ‘Leis, Liquor and Lies’, took their dysfunctional relationship to Hawaii …. and to a whole new level. I don’t quite no where to begin with this epic situation except to say that we learned a lot of really unfortunate things on this episode.

First of all the way 23-year-old James Kennedy maneuvered a spot on the trip by using Lisa Vanderpump’s son Max Todd’s crush on new Server Faith was nothing short of brilliant. I mean not even Kristen Doute was able to out-maneuver that ban.

Apparently cute 23-year-old Max Todd is dating Faith and James was absolutely banned by birthday boys Jax Taylor and Tom Sandoval, but who was to stop him and Max from organizing their own trip to Hawaii, Right?

Somehow we learned about James Kennedy’s penis size. So this means we NOW know the penis size of 3 out of 4 of the male cast members of Vanderpump Rules…that’s right 3. Come on Schwartz….give us the deets.

I was dying last week when Lala Kent was asked about the size by Faith and she replied “I don’t know”, but this week Lala clarified by saying that James could not fit inside any of the condoms she has.

Now we know that castmate Tom Sandoval’s pen!s is all of 4 inches thanks to AnneMarie Kunkel from Miami–remember her?, but we know from James sleeping with Kristen that James is bigger than Tom, but still on the small side from Lala so 1 and 1 and 1 is about 5 inches. And Mr. Magnum Jax Taylor is in a league of his own. Unfortunately we have way too much evidence to support this. The first piece came when Golgnesa from Shahs of Sunset let the cat out of the bag on WWHL telling us that all his “parts” were “proportional”. Suffice it to say Mr. Jax wears an extra large. No wonder he is such a hit with the ladies.

And now that we know Lala keeps a supply of condoms for healthy-sized men on hand–so it makes sense why she can’t stop flirting with Jax.

I think chances are better that Lala will hook up with Faith than with James.

Another unfortunate thing that happened in this episode, was we had to watch Jax sitting on the toilet and we had to learn that Jax talks to his girlfriends from the toilet with the door wide open. Thank you Bravo. I can not unsee that!

Brittany was perseverating on how Jax was flirting with Lala and what she heard from Scheana. Can you blame her for being concerned?

Anyhow Brittany declares that she would have a nice little chat with Lala in Hawaii. Last sad sitch was Lisa’s son Max had an accident where he knocked out his teeth. But luckily James was there to handle things and got him to the dentist right away. Max was repaired, but is still heavily medicated, but will thankfully be allowed to go to Hawaii because if Max didn’t go then James and Lala could not go, but Max is absolutely forbidden from doing anything with his mouth by mom Lisa Vanderpump.

The episode ends with the crew boarding their plane for Hawaii. Hopefully next week we will actually get to Hawaii.