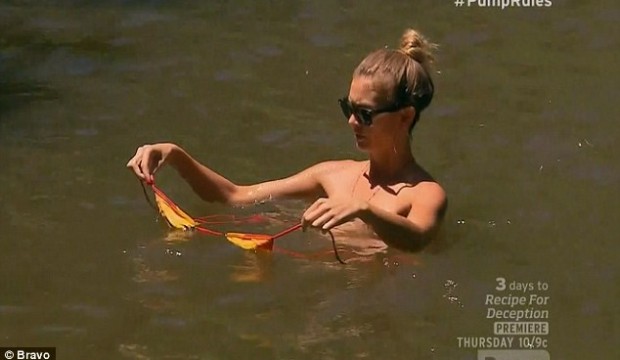 I never believe people when they say they have no regrets. There is ALWAYS something to regret….especially if you star on a reality show like Vanderpump Rules.

Understandably the original cast members were not too easy on the 25-year-old Salt Lake City, Utah model. In fact the hazing started immediately after they learned that Lala needed some time off to go to a modeling gig in Italy. Her co-stars were merciless…insisting that no one gets flown to Italy to model and implying that Lala was some sort of high class escort.

In fact this season of Vanderpump Rules was a lot more like Survivor as the OG cast members, now in to their 30s, know that time is not on their side and that LVP is obviously on the hunt for younger stars to replace them. So they put aside their differences momentarily to gang up on the young newcomers.

But despite the rough entry Lala claims there’s “not a damn thing” she would change about Season 4 of Vanderpump Rules, but she does concede that one thing may have done her in on the show…the topless bathing in Hawaii with her male co-stars.

“It was definitely in Hawaii, when the whole taking my top off situation happened”

(I love it when something is officially designated as a ‘situation’)

“I’ve never been attacked like that by anyone let alone a group of people. After that it was time to show that I’m a gangster and coming at me like that isn’t going to fly. I started taking names at that point, putting anybody on blast that had a problem. I had played nice, but there was no winning. So I changed the game.”

Co-star Katie Maloney was especially outraged that Lala took her top off in front of her new A-sexual fiancee Tom Schwartz. And on the Reunion even Brittany Cartwright expressed disappointment in Lala’s decision to make the big reveal in front of the guys.

But it sounds like Lala wasn’t too traumatized by her edit on the small screen–surprising especially after all of the accusations about prostitution and the rim job revelation.

Remember Lala, you are working for Lisa Vanderpump. If there is anything even remotely salacious in your past LVP will find find a way to take your lemons and turn them in to her lemonade.

In regards to how she feels about her new boss Bobby Fischer, I mean Lisa Vanderpump she said,

“There are too many things I love about her. She is a boss and keeps us all in line, but most importantly she has a kind heart and would do anything for anyone. She taught me how to stand up for myself but also taught me how to be vulnerable without being weak.”

She also issues Lala a nice paycheck so take it for what it’s worth. But yay! Looks like Lala is on board for season 5!