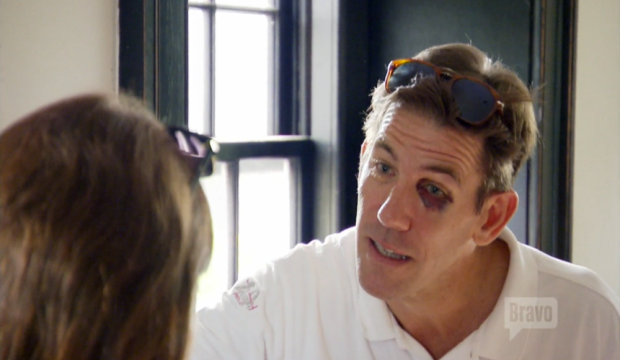 Thomas Ravenel and Landon Clements appear on the season premiere of season 3 of Southern Charm and they seem pretty comfortable with one another walking through T-Rav’s new home, talking about Ravenel’s black eye and blasting Ravenel’s baby mama Kathryn Dennis.

I was a bit surprised since I had no idea that 34-year-old Landon and 54-year-old Thomas were so close. Not to mention as bad as Kathryn seems, it’s hard to imagine anyone siding with Ravenel considering his behavior.

My first thought was “are these two hooking up?”, my second thought was “Landon must really want to secure her position on the show if she has to hook up with T-Rav”.

After all 35-year-old Shep Rose, the guy who calls her “the one that got away” is emotionally unavailable now so she needs a plan B for her second season on the show.

So one thing I love about Craig Conover is that he is such a bitchy diva he can never keep his mouth shut if he thinks something is going down.

Remember last year when he talked about Whitney Sudler Smith’s ‘girlfriend’ actress/model Larissa Marolt in air quotes implying that Whitney may be a little gay? So we can always count on Craig to spill the beans on some underlying scandal that no one else has the guts to talk about.

On Watch What Happens Live, host Andy Cohen asked Craig about the possibility of a hook up between Thomas Ravenel and Landon Clements.

Conover doesn’t exactly answer but the smile on his face says it all.

“I think you just answered it,” Cohen responds.

Later Craig tries to do some damage control saying,

“No, I don’t. God, wow. That was the best question you could’ve asked me tonight.”

But I think it’s too late to back track Craig. You can’t put the toothpaste back in the tube. Seems pretty clear to me that we have an official situation here.

Harry Hamlin goes in to damage control with Lisa Vanderpump