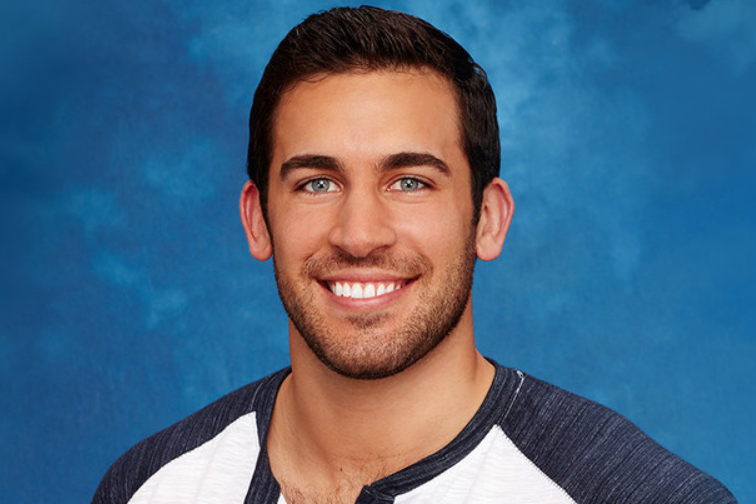 Derek was born and raised in Iowa to mother Maria Peth, 56 and father Dick Peth, 59. His father was inducted into the Wisconsin High School Basketball Coaches Association Hall of Fame. Derek has a younger sister named Rachel.

He went to Waverly-Shell Rock High School in Waverly, Iowa and attended a four-year liberal arts college: Wartburg College which interestingly is a college of the Evangelical Lutheran Church. So….looks like we have another good Christian boy for Jojo.

After graduating from Wartburg Derek moved to NYC to work in banking. But he also lived in Fort Lauderdale, Florida at some point in between. Like most of Jojo’s men Derek is also an aspiring singer.

Here he is performing the Ed Sheeran song ‘Thinking Out Loud’ with Brittni Donaldson. And what do you know? They are pretty damn good! He may not get the final rose, but maybe he will get a record contract. 🙂
Some meets from his ABC bio:
“What does being married mean to you? I’ve seen my parents work through life’s challenges and successes for 33 years, so I’m looking for someone ready to give as much as I will to make life fun and fulfilled.What is the most outrageous thing you have ever done?: Drunkenly skinny-dipping in the ocean at 3am when the sharks are all active.

Would you describe yourself as “the party-starter,” “the wingman” or “the laid back one”? I’m definitely the wing-man. I’m there and involved, but not in your face.

What are your three best attributes? My baby blues seem to get a lot of front-end attention, thirst for knowledge and learning, compassion for others.”

The Bachelorette premieres Monday, May 23 at 8 p.m. ET on ABC.