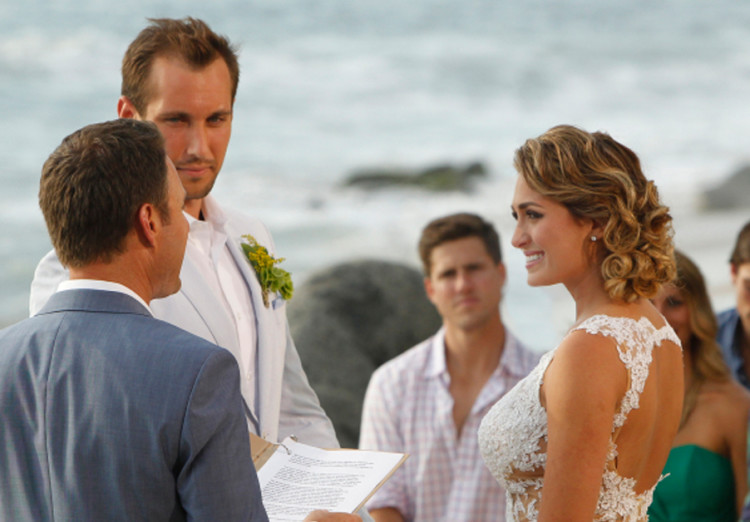 Things are getting ugly between former Bachelor in Paradise contestants Marcus Grodd and his ex wife Lacy Faddoul — of course I have to qualify the word “wife” since they were never legally married despite ordained minister Chris Harrison officiating the nuptials.

“Looking back now, it just seems like [Lacy] became a different person. Her priorities changed, what she wanted in life changed. She was just a very different person from when I first met and got engaged to….”

He goes on to claim Lacy was “toxic” and “controlling”.

“It became a toxic relationship at times. She was very controlling. I was more of an appeasing person. I wouldn’t want to fight. There were a lot of barriers that we couldn’t overcome. I think that that made her change her mind.”

Well this is disappointing but not shocking. I think Lacy had ‘trouble’ written all over her from the get go and poor Marcus is just so sensitive! It was obvious that she was going to eat him alive.

The couple was engaged on the season one finale of Bachelor in Paradise and they married in June 2015 on the Season 2 premiere.

Grodd left for some time after joining the Coast Guard and when he returned from training he said,

“it was just a very different situation with her,” …… “It was kind of like postponing our plans. That was the drop of our relationship.”

Grodd lamented that Faddoul “didn’t want to live together anymore.”

“She wanted to be able to take time apart again,”…..”Things just drastically changed after I got back. It wasn’t the best situation to start planning a ceremony here in California.”

She also allegedly back-tracked on her desire to have kids with Grodd.

“I don’t whether it was me or just in general, she negated wanting to have kids at this point in our lives,” he said. “I don’t know if it was because of me or we were in that relationship and she didn’t see it with me or just as a long-term thing.”

There is some speculation that Lacy was cheating after Marcus found “flirtatious” text messages in her phone. At any rate the break up clearly ended because of Lacy and not Marcus. Marcus did everything to salvage their relationship.

“I was trying to do everything in the book — send her flowers every day, buy her presents, take her to dinner. It seemed like everything was on my end. There was no effort on her end with the relationship. That’s the only thing I regret doing is trying to force it… trying to appease her and trying to get her back in a sense.”

Marcus claims that he has not seen Faddoul in over two months.

“I think Lacy and I are done for good,” Grodd said. “From what I’ve seen of her the past six months, 10 months, a year, that’s not the woman I want to have my kids with and have a family with. I think it’s good and gone.”

Yikes. Lacy has remained tight-lipped for her part in this epic situation.

On a brighter side Producer Mike Fleiss claims that 3 couples will get engaged on the finale of season 3 of BiP.