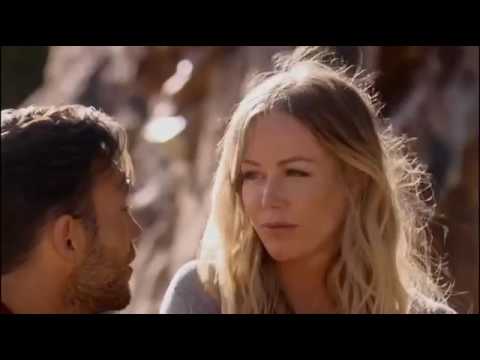 Last Tuesday night Jasmine Lorimer and Kevin Pattee finally had some one-on-one time climbing a steep cliff face in the High Atlas Mountains and the two got very real about their lives and their issues. In fact it was probably the most real conversation the show has ever seen.

The 35-year-old semi-homeless ukulele-playing deckhand is clearly a Romantic with a capital “R”. Kevin P. is in love with the idea of love. He wants to pine away for someone, but he doesn’t really want to settle down with someone.

“I’m looking for someone to go get lost with and travel, and be somewhere new every five years and get our asses kicked,” he says…..adding, “I don’t think that love lasts forever.”

He even concedes that he doesn’t really have a Hometown. He is closest to his sister who lives in Edmonton but hasn’t seen his mom in 15 years. In fact he tells Jasmine that his mom has had some very “serious battles” with addiction and is not fully in his life.

Jasmine confides in Kevin that her dad struggled with addiction. She hints that that is what ultimately led to his untimely and sudden death when she was 13.

Kevin eggs her to “be honest” about their future aka he begs her to give him the boot. “Is this a fork in the road or the end of the road?” Kevin asked.

The two concede that their weaknesses are too similar and they need to go their separate ways.

The Bachelorette Canada airs Tuesday’s at 9 p.m. on W.