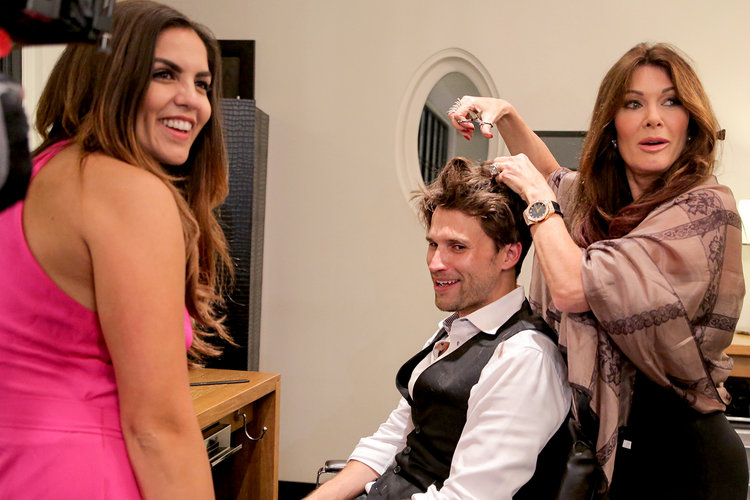 On last Monday’s episode of Vanderpump Rules after a very acrimonious duel Bachelor/Bachelorette party in New Orleans, we saw a very desperate Tom Schwartz and Katie Maloney approach minister extraordinaire Lisa Vanderpump to officiate their upcoming nuptials–yes, Lisa Vanderpump got ordained when she became the queen of West Hollywood so she could preside over gay marriages, but she was not anticipating that 2 of her straight minions would also want to get in on the action.

So the creative, and unhappy couple, send LVP a telegram asking for her hand in their marriage, aka ‘our incredibly dysfunctional relationship has made you millions of dollars, the least you can do is officiate our sham wedding so we can sell our marriage certificate on E-Bay’.

But Lisa has now backed herself into a corner, because 1: she only wanted to ordain gay weddings and 2: now her pulpiteer powers will be associated with the sham wedding of Tom and Katie and will undermine her credibility when officiating future gay weddings–although to be fair Tom Schwartz is gay so this sort of is a gay wedding.

The episode also brings to light the fact that none of Tom and Katie’s friends believe in this relationship!!!–which suggests to me that Tom has been seriously expressing doubts behind the scenes to his best men, Tom Sandoval and Jax Taylor and his therapist. And it suggests that their sad relationship is not just the victim of strategic editing.

So Lisa tells them they better seriously put this relationship on steroids and shape up or else. So Tom and Katie begrudgingly have sexual intercourse to show LVP that they are serious. And LVP begrudgingly agrees to christen the $50,000 marriage at the Twenty Mile House, just outside of Lake Tahoe, California–notice Lisa did not even offer the couple her kick ass pad for said location.

Alright, March 27th when we will finally see the beautiful nuptials of Tom Schwartz and Katie Maloney!!