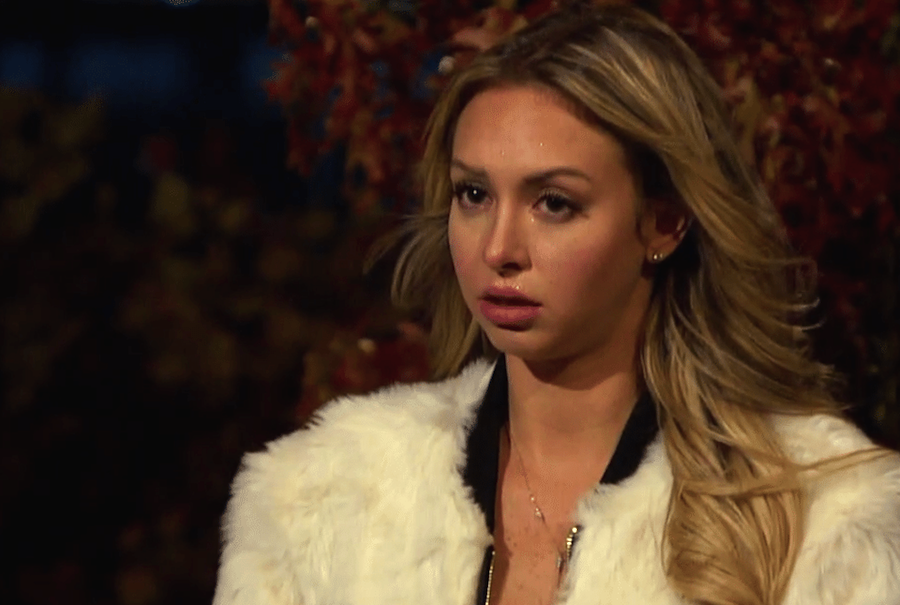 Two and a half months after Corinne Olympios shut down production of Bachelor in Paradise alleging sexual misconduct by co-star DeMario Jackson she is announcing her breakup with boyfriend Jordan Gielchinksy.

If you’re a little puzzled as to how she had time to have a boyfriend to break up with since filming ended in June,…so are we.

Host Chris Harrison asked Corinne when she landed in paradise if she had a boyfriend and she said ‘no’, so either she was lying or the girl works fast….and I suspect it’s the former.

Anyhoo, Corinne spoke to Us Weekly and other reporters at the Showpo U.S. Launch Party in Hollywood on Thursday, August 24 and expressed that her relationship with Jordan was over.

“We are not together anymore.”

In June Gielchinksy told E! News this in response to the BiP scandal,

“I have known Corinne for over 10 years and as a friend or boyfriend, she will continue to have my unwavering loyalty and support until I decide that there is a legitimate reason not to give it,” ….. “I pay very little attention to the media and try to ignore all the conjecture surrounding my relationship with Corinne. The only two people who know the true disposition of our relationship is Corinne and I.”

And in March Corinne was accused of being engaged to Jordan while on Nick Viall’s season of The Bachelor.

“I’m not engaged. I don’t know [why people are saying that]. I”m hearing so many different things,” Corinne told Us Weekly exclusively at the time. “It’s just that people love to talk, I guess. I just feel like when the right person comes along, they’ll just come along and it’ll feel right and I won’t have to stress about it.”

Corinne’s yarn spinning is getting more and more suspect in my opinion. Hopefully one day we will learn the truth about the real motives behind all of this chicanery.