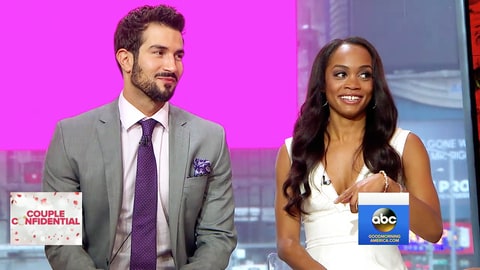 Bachelorette Rachel Lindsay and fiancée Bryan Abasolo appeared for their GMA interview this morning or as I like to call it … damage control.

And it was the first sign that this relationship has half a chance—that they showed up that is.

The duo looked absolutely amazing together. That said, the chemistry seemed a bit awkward.

Host Michael Strahan asked the new couple a series of questions about each other. Rachel couldn’t recall a special talent that Bryan had–she didn’t even acknowledge his soccer ball juggling skills! Ouch!!

Nor were there any of the usual ‘so when do you guys think you’d like to get married’ questions! In fact there was no discussion of the current status of their relationship.

They did however both recommend the handsome, quirky Russian to be the next Bachelor, Alex Bardyukov.

I suppose that was one last dig at runner-up Peter Kraus. And a good indication that despite what Rachel says, she is not over it.

Speaking of the ‘P’ word, when Bryan was asked if he ran in to Peter backstage on After the Final Rose, he said,

“I actually didn’t meet with Peter last night, but I saw the final episode and yeah, as a man, you feel a little frustration of how she was treated in the position she was put in for the simple fact that here I am, you know, totally committed, totally invested, totally ready to start a real future with this woman,” ……

“And then on the other end, you know, you have someone who’s indecisive, wishy-washy, and at the same time he’s telling her he’s in love with her and will propose. So, you know, it was just tough to watch.”

And after Rachel realized Peter wasn’t going to budge on the proposal sitch she said,“At that point, I knew that he wasn’t the one for me,” she said. “It was really important for me to not have two men standing up there at the end. If I knew what I was going to do, then I wanted to send that person home the night before.”

Here is the video….