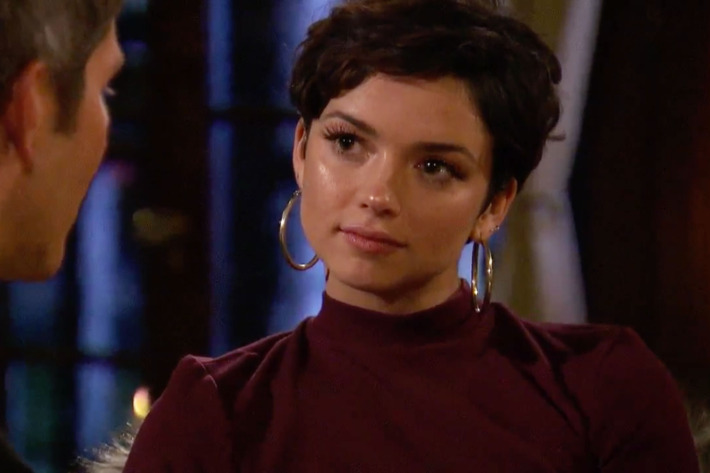 Bekah Martinez, the adorable Nanny from Fresno, CA is really becoming a situation for Bachelor Arie Luyendyk Jr.. Bekah refused to tell him her age when she first arrived because she didn’t want the 36-year-old race-car driver to dismiss her based on the major age difference between them. So he knew that she was ‘young’, but he was hoping she was late 20’s young, not barely able to vote young. Alas, after some pretty amazing dates and some serious chemistry, Bekah decides it’s time to come clean. She asks “do you know how old I am?” Arie looks concerned and says, “no”.

At this point it sounds like Arie knows he can’t give her a rose or he will forever be known as ‘that guy’. But after numerous reassurances from Bekah cloaked as non-reassurances,

“Stop looking for me to give you the reassurance I’m not going to give you,” she says as she kisses him.

Arie grabs the rose and hands it to her!!!

So part of the problema here is that Arie already has a serious reputation for chasing age-inappropriate girls around–a fact that will only be exacerbated by the #metoo movement, so his decision to pursue a girl that graduated from High School a mere 4 years ago could really backfire.

Arie wrote about his decision to keep Bekah in his blog,

“Watching this back, I could see that Bekah M.’s age was becoming the topic of conversation in the house. I have to admit, I knew she was probably one of the younger women, but you wouldn’t think so by speaking with her. At this point in this journey, some of my most interesting, challenging and thoughtful conversations had been had with her.  As I stood at the horse stables waiting to see Bekah for the last date of the week, I knew I needed this one-on-one to figure out if we had a future … or really if she felt ready for the future I was envisioning for myself.

….As we road through the trails and arrived to our sexy hot tub in the woods, I just wanted to live in the moment with her.

Bekah has a way of making our time together feel easy and effortless, but in the back of my mind I knew that by the end of our date I’d need answers to some of my questions. Heading into that evening, I was ready to go deeper with Bekah and see if our lives match up for what we are looking for. After finding out that Bekah was 22 years old, I have to say it was shocking. I appreciate what she said about not wanting me to see her through the lens of her age — and up to this point I truly hadn’t. So far everything about Bekah that I had gotten to know led me to believe she was wise beyond her years. I felt like it would have been wrong and I’d regret it if I didn’t give her the rose only based on age. Bekah is an incredible woman and I could see myself one day falling in love with her. I was afraid and I was hesitant but went for it because I knew she was worth the risk.”

Oh Arie—the ‘ol ‘age is just a number’ excuse…you can imagine how pedophiles probably see the world through that ‘lens’. Im not saying Arie is a pedo, but I think he may want to think that rationale before we see him on Dateline, to Catch a Predator.