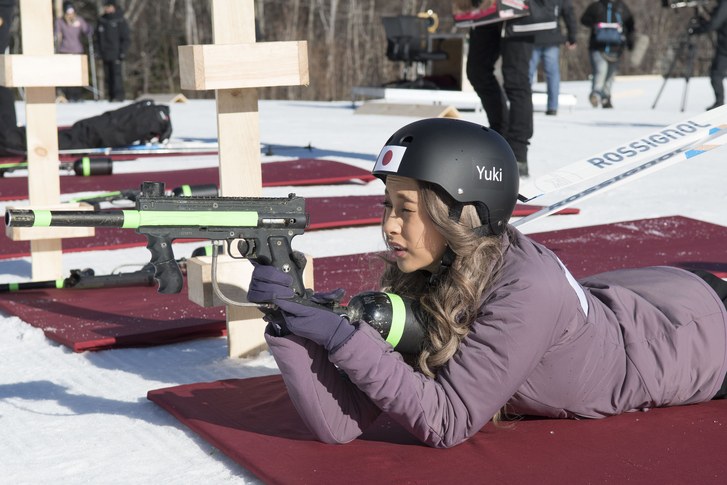 Last night millions of Americans tuned in to the premiere of The Bachelor Winter Games to watch contestants from the global Bachelor franchise compete with each other for some sort of prize.

The first rigorous event took place at The Hermitage Club in Vermont–a biathlon that combined skiing and marksmanship. The energy was intense. There was a lot on the line. Not only were these contestants competing for some sort of prize? (does anyone know what the prize is?), they are competing for love.

And I have to say, I fell in love with amazing-ness of this ridiculous new spin-off.

So with no further ado, rather than a ‘recap’, I’d like to break-down the top 10 situations from the premiere….

10: Bachelor Ben Higgins using Lauren B. as an excuse to not be emotionally available.

So the show starts by reintroducing us to lovable Ben Higgi, but don’t get your hopes up single ladies, Ben reveals that he is still nursing a broken heart from ex fiancee Lauren Bushnell, but the problem is he has been seen in public numerous times cozying up to a very sexy seductress named Lindsay Duke.

I suppose it might be more forgivable if this girl was not straight out of a Girls Gone Wild video. But suffice it to say, Lindsay is first and foremost a sex kitten and she knows it.

Looks like Deanie Baby has some competition this season as several women have their eyes set on Canadian firefighter Kevin Wendt including Miami Dolphins cheerleader Bibiana Julian who stakes her claim in to Wendt before Ashley I. has the chance to call dibs.

Kevin is very pretty, but just wait until the ladies experience his conversational skills.

8: Dean Unglert is back and after one really emotional love triangle on Bachelor in Paradise, he is ready to do it all over again!

Why is it Dean always falls in love with the first woman he makes eye contact with? This time it’s Lesley Murphy who I will always remember from the shows most awkward 1 minute kiss with Bachelor Sean Lowe.

7: Speaking of Lesley, she is back with a few new “upgrades”.

Lesley revealed that her mom was recently diagnosed with breast cancer so she got tested and discovered she was also at high risk and thus chose to have a double mastectomy. On the bright side she got breast implants which she is quite happy with telling Dean, “You can be the judge,” ….. “I think they look great.” Whoah!!! Clare has had some bad luck in the love department for the past few years unless you count a raccoon and a Mexican turtle. But low and behold Clare attracts the eccentric epicurean from Old Montréal. Like a moth to a flame, 29-year-old Maître D’ Benoît Beausejour-Savard sets his sights on the 35-year-old hairstylist, from Sacramento, California.

Usually it’s Clare that falls in love at record speeds but previews suggest that this time Clare is the one that has to put the breaks on.

5: Luke Pell is here to promote an album.

Neither Luke nor Ben seem remotely interested in finding love. Luke knows he has plenty of tail back home, but he is here participating in a tournament that he is way over qualified for and couldn’t be less interested in, for one reason and one reason only: it’s an amazing opportunity to remind the world that he is a country western star and to sell some albums!

The stark, stoic, sullen Bachelorette Germany contestant is very upset that the women don’t seem that interested in him and that contestants have already paired up: Lesley and Dean, Josiah and Ally, Courtney and Lily, Luke and Rebecca and Clare, Benoit and Kevin and Bibi have all shared a make-out session. Ok, I have to admit I wasn’t sure how this show was going to work given that ski skills vary dramatically among-st people so how could this competition possibly be fair?

Well, by being ridiculously easy. I suppose the fact that it was in Vermont should have been my first clue.

To start the two teams head off on a short cross country stint on flat terrain ending in a very gentle down slope and then to a shooting gallery where they have to shoot a paintball gun a few yards inside the circumference of a giant red rose.

There is no way anyone could possibly get hurt—oh but they did. As Ally Thompson is gently gliding along the completely flat terrain she falls on her ample buttocks and calls for paramedics. Ally is bawling and thrashing about in excruciating pain, pretty sure she is out of the competition for good and may be disfigured for life. Josiah pounces on the moment of vulnerability and follows her to the first aid station.

Chris revealed a BRAND new look last night. Casual Wilderness Chris with 3 day beard. Chris was clearly conveying that he is comfortable with himself, confidant in his ski skills, he’s manly, he’s ready to jump right in if need be and get dirty, and he is ready to get this serious athletic competition underway. And finally, the number one situation from the Winter Games premiere…..

Although the 21-year-old only had about 6 minutes of air time last night, she clearly stole the show. Yuki really exemplified what is so genius about Bachelor Winter Games…that these silly human archetypes are virtually the same wherever you go. Yuki is clearly a bit of a diva, a bit entitled, but she doesn’t appear to take herself–or anything for that matter– too seriously. She is pretty sure that she has already won the competition or is at least in the ‘top four’ before the rose ceremony even begins. I’m guessing Yuki’s father is a wealthy Japanese businessman, that she’s an only child, and that she has some jewelry line to promote or an album dropping, but god knows it will never get across in translation! But none of that matters, her amazing-ness and charm transcends any language barrier. She has my 1st impression rose hands down!

Ok, so aside from that the show ends with:

Kevin choosing Bibiana for his date, over Ashley I. Rebecca Carlson picks Luke for her date night.

Laura, Zoe, Lauren, Jamey, and Eric get the boot.