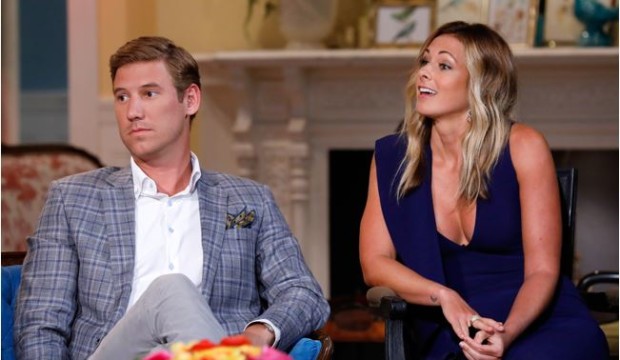 Tonight Season 5 of Bravo’s Southern Charm premiered amidst a bevy of situations. One of the situations addressed is the breakup of Austen Kroll and Chelsea Meissner. To back up a minute, last we checked, it sounded like Chelsea was the one who got cold feet and pulled out of the relationship, but now it sounds like Chelsea dumped Austen because of some shady behavior–which makes me think the two got back together after the show stopped taping last season.

And on the season 4 reunion Kathryn Dennis suggested that Austen cheated on Chelsea with Landon Clements.

So tonight Austen, 30, reveals that Chelsea, 32, wanted to slow down (I assume this is referring to what she told him at the end of last season) and he reacted like every man would— by dating her friend — her friend Victoria — Victoria Bolyard, 30 of Mount Pleasant South Carolina–which must have happened right after taping stopped.

Anyhow, since that time Austen claims that he has broken up with Victoria and still believes that the “door is ajar” with Chelsea.

But Chelsea doesn’t seem super pumped about Austen whom she claims is unemployed and would show up at her house at 3 a.m. wasted and looking to get laid. I’m not so sure that door is “ajar” as much as it maybe looks ajar, but is booby-trapped to make sure Austen can not get in.

Chelsea wanted a gig as a full-time cast member on the show and I presume that an “ajar” door with Austen was a prereq to getting the gig. So I look forward to seeing Chelsea flirt with Austen as little as her contract allows and for Austen circle the drain in response to the unrequited love.

So what about Chelsea’s other suitor, Shep Rose? He may make a play for her especially since he broke up with his RelationShep girlfriend Bella Clark and since Shep is trying to grow up this season. We shall see.