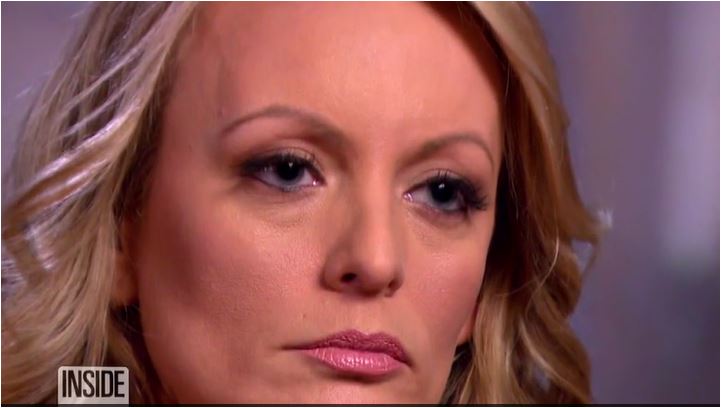 If you watched 60 Minutes Sunday night you saw the infamous Stormy Daniels and her attorney   Michael Avenatti field questions from host Anderson Cooper about the 39-year-old pornographic actress’ alleged affair with President Donald Trump in 2006. And if you were like most of America you noticed her pupils were extraordinarily and unusually dilated.

Since that time Stormy and her team claim the dilation was the result of Benadryl, but many people aren’t buying that excuse–including me.

I consulted an expert–aka my father who is a Doctor and asked him. He said the pupils indicated she was likely on Cocaine or Crystal Meth not Benadryl. He also said she is missing some teeth because there is clearly bone loss in her lower jaw. Missing teeth notoriously go hand in hand with Crystal Meth use.

Additionally, Stormy was also seriously buttoned up—sleeves down to her wrists which could be an effort to cover track marks.

Regardless of the cause of her obscenely large pupils, Stormy D just does NOT look healthy. She is not aging well at all. Now that doesn’t mean I think she is lying about sleeping with DJT. It just means I question the entire story and her motivation for coming forward.

Stormy Daniels aka Stephanie Clifford filed suit to have her non-disclosure agreement declared null and void since Trump, himself, never signed it.