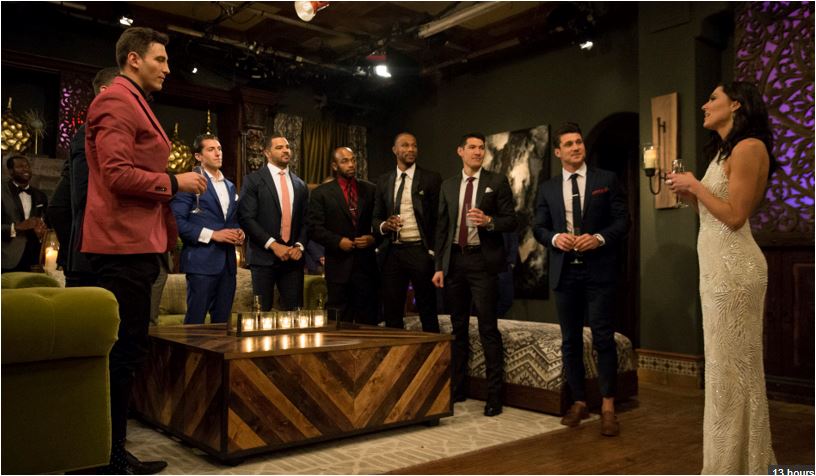 Tonight Season 14 of The Bachelorette began and 28-year-old Minnesota publicist, Becca Kufrin returned to the Bachelor Mansion to meet her men and to…  “do the damn thing.”

Yes we have come a long way from the Bachelor/ette’s best tag line ever “On the Wings of Love” circa Jake Pavelka, 2010, but let’s not judge a show by it’s bad tag line. Let’s judge based on first appearances of the men.

The show opens with some footage of Becca crying as she looks at old (as in 3 months ago) pictures of her and Arie together, then the happy proposal, and cut to flashback footage of the breakup that occurred after the last Bachelor season, but still on camera, and aired after the Bachelor season finale a few months ago when Luyendyk had a change of heart and picked runner up Lauren Burnham after proposing to Becca.

Becca bawling and responding, “I can’t imagine my life without you.”

We then see footage of her back home in Minnesota with her sister and mom trying to process the breakup and pull herself together.

Cut to a montage of host Chris Harrison introducing Becca as the new Bachelorette, and the massive support from fans as well as Minnesota politicians who have banned Arie from the state of Minnesota.

We are quickly reminded that now Kufrin is in the ‘driving seat’ as she speeds down the freeway in a red convertible proclaiming ‘let’s do the damn thing’.

Of course ABC is riding the #MeToo movement and has to remind us that this is not about one immature douchebag named Arie Luyendyk Jr., it’s about douchebags everywhere and female empowerment.

Enter a gaggle of former contestants waiting for Becca to arrive to the mansion, sage smudge sticks in hand, to get in some good digs at degenerate dirtball Arie.

Kaitlyn Bristowe, JoJo Fletcher and Rachel Lindsay joined Kufrin to regale Becca with their own horror stories. And rather than blaming the rather absurd framework of the show they decide to blame the mansion itself and start saging.

To the intro packages:

One very sweet, cuddly bi-racial football-player named Clay Harbor who really loves his grandma and one football-player named Colton Underwood who runs a Foundation for Cystic Fibrosis at the tender age of 26. Hmm, for some reason I’m not really feeling Colton. Something seems fishy about that whole situation.

There is a colognoisseur named Jean Blanc, who is really in to his signature smell. He comments that Becca deserves a man that smells good.

There is a handsome grocery store owner named Joe who is really in to inspecting his produce. A Hollywood stuntman named Leo Dottavio who takes the opportunity to unleash his lustrous mane of curly black hair, to which Becca proclaims, “he has way better hair than I do.”

Garrett Yrigoyen arrived in a fully stocked minivan, soccer balls and all.

Someone who brought an entire choir in their limo.

Blake Horstmann, who first met Becca on “After the Final Rose” riding in on a horse exchanged the horse for an ox. Becca is rightfully concerned that Blake may be more into the animals than her. One super creepy entrance in the back of a hearse with the line, “When I found out you were the Bachelorette, I literally died.”

David Ravitz of Denver showed up in a chicken suit, saying “I’m not here to ruffle feathers.”

Chris Staples, a former Harlem Globetrotter, who dunked a basketball over the Bachelorette into a hoop on the driveway.

Chris Randone tells the other guys that he knows the ex girlfriend of Chase Vergason from Orlando, Florida and that she texted him after Chris appeared on ATFR.

“I’m friends with one of his ex girlfriends,” Chris confides in the other guys. She told me that “he’s not here for the right reasons.. he’s trying to revamp his marketing company..do you think I should talk to her about it.”

Blake says “even if there’s a small chance that he’s here for the wrong reasons you gotta.”

Chris pulls Chase aside to talk to him. Chase tries to reassure Chris that he is there for Becca.

Knowing the bombshell would be disclosed to Becca, Chase launches a pre-emptive strike and confesses to Becca before she is even told.

But this just confuses Becca. Chase gets Randone to fill Becca in on what the woman’s text said.

Chase contends this is not an “ex”, it’s a girl he dated for a month or two weeks. Needless-to-say Chase does not get the first impression rose….or any rose.

There was a rather bizarre appearance by a guy named Jake Enyeart, that Kufrin knew from Minnesota. Becca questions Jake’s motives for being there begging the question what kind of relationship did these two have? Did they date? Did he ghost her?

Becca sits down with Jake and she reveals that the two have met numerous times and there was no real interest there. Jake only recalls meeting Becca once and is downright offended that Becca is questioning his motives, but his efforts to squash Becca’s fears are futile.

Despite telling her that he “had a very transformative year”?, Becca sends him packing saying, “Honestly I don’t think he’s here for me.”

First impression rose went to handsome surgical assistant, Garrett, whom Kufrin said “made me laugh and made me feel so comfortable.”

“The Bachelorette” airs on Mondays at 8 p.m. on ABC.