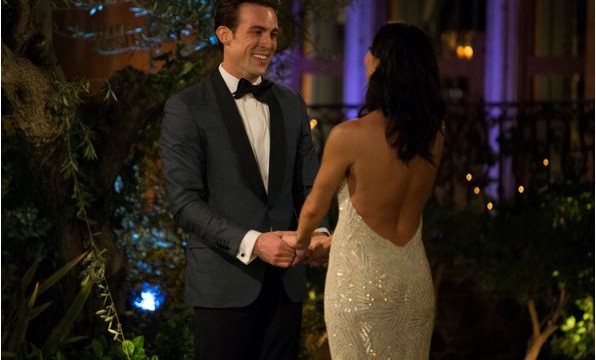 Becca suspected that two of her men were not there for the right reasons, Chase Vergason and Jake Enyeart.

Things got awkward when Becca recognized Jake from Minneapolis and implied that he had crossed her in some way. Later in the evening she pulls Jake aside and tells him they have met numerous times and there was clearly no chemistry. Jake claims he only recalls meeting her once. This statement seems to infuriate Becca.

Becca said this in her PEOPLE blog,

“Though the evening had a ton of highs, there were also some unexpected lows. I wasn’t expecting too much drama for the first night, but apparently it seemed to follow me around like a shadow.

First, there was Jake from Minneapolis. Now, contrary to what Jake remembers, he and I have met several times and we run in the same circles (Minneapolis isn’t the biggest city). But I’d at least like to think that he’d remember me even just a little bit! And if I was so unmemorable in a small group of people, then why now? Is it because I’m the Bachelorette? These are the questions I hate to ask myself, but have to.

Because I didn’t want to start off the first night questioning any man’s motives, I decided to send him home early even before the rose ceremony. While I’m 100 percent certain I made the right choice to do it then and there, it was more difficult than I initially thought to send someone home, especially early. I knew it would only get harder as the night and weeks wore on.”

Next there was Chase.

Chase’ ex girlfriend texted Chris Randone after Chase appeared on After the Final Rose to meet Becca, to tell them that Chase is not on the show for the right reasons.

Chase tried to explain that it was a miscommunication and was not an “ex”, but a girl he dated for a month or two weeks.

But his explanation only confuses Becca. Chase tries to bring in Randone to clarify, but Chris R. does not help the situation.

“The drama continued with Chase and Chris R. Now if I’m being completely honest, I still don’t know the full extent of the issue, but it’s a lot of he said he said going on. I was dizzy listening to Chase scramble to explain himself, and I don’t know the whole story, but it had the distinct rhythm and cadence of BS. In my mind, I had a great group of guys who I felt were here to really want to get to know me, so I didn’t feel the need to keep someone around who was already laced with drama. To be blunt, I wanted to shed the fat as quickly as possible.”

According to the ex, Chase was on the show “trying to revamp his marketing company”