No, not a physical battle, nor a rap battle, but a social media battle started by the “Candy Shop” rapper, 43. Fiddy set the fire ablaze on Emmett’s Instagram Friday and in the process revealed that Emmett owes him a million dollars!

50 shot a jab at Emmett’s fiancé, Lala Kent, referring to her infamous Range Rover comment. “10 seconds left in the 4 quarter hoe’s are Winning. Do you want A range rover, yes, bitch yassss. Then just run out and suck a d-–k. LOL smh.” 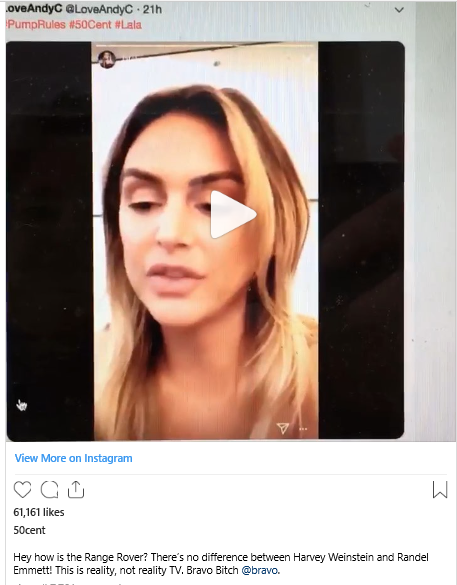 Lala shot back at Fiddy making fun of the fact that he actually watches Bravo (which is pretty funny). To which Fiddy clapped back by posting screenshots of texts with Randall — a fellow executive producer on his show, “Power” — calling him a loser and asking him if he told Lala he owes him a million dollars.

According to sources at TMZ the million dollars was a loan to Emmett which Randall has allegedly avoided paying back for years. The source also claims that 50 helped Randall get on “Power” as a way to help him pay back his loan.

Needless-to-say Fiddy is done waiting and said, “Keep playing with me and get ya f***ing head cracked in front of everybody.” 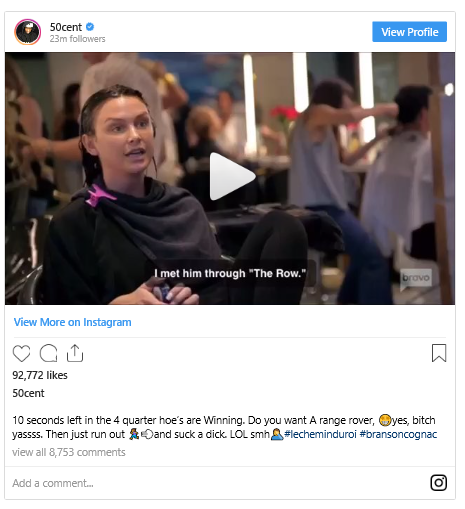 Adding credence to 50s claim, 50 said that Randall promptly sent him $250k of the million, adding in a caption that Emmett “sent me 250k today but I want all my money Monday,” ….“if he ain’t got it he can put his Rolls Royce on the truck to NY. The friend s—t is over rated.”

Then after Emmett mentioned he asked 50 to be in his wedding 50 shared another text he sent to Emmett saying, “You took my kindness for weakness now I’m show you what I been try not to do to you dumb motherf***ers.” 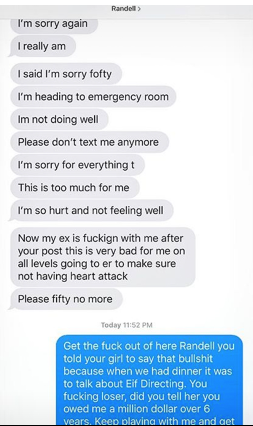 I’ve never been shy about my disdain for Emmett. The guy seems shady as hell….like mafia shady.

Remember Kristen Doute accusing Randall of calling and harassing her.

Additionally, his company has been sued for fraud and racketeering.  And all of his “business” in Dubai had me thinking Emmett is in more than just the movie business.