Twenty-four-year-old Entrepreneur Luke Parker won the hearts of fans and Bachelorette Hannah Brown when he met her for the first time in front of a live studio audience.

“You are absolutely stunning,” Luke told Brown. “You are the only one that I wanted to be the next bachelorette. And now that I’m here actually holding your hands, in real life, seriously this is just blowing my mind and I seriously cannot wait to get to know you on a deeper level and just go on this adventure with you.”

But if it wasn’t for Luke’s loving family he may have never met Hannah. Luke’s family spoke to the Gainesville Times about Luke’s “journey” to be on the Bachelorette.

Luke’s sister-in-law, Hannah Parker, an avid Bachelor fan said,  “This time last year, he went through a bad break up,” and watching Luke go through that pain compelled her and Luke’s brother to submit Luke to be on the show.

”I watch the show, so my husband and I were just sitting there and I was like, ‘I’m going to apply Luke for the show and just see what happens,’ thinking he had no chance of getting on the show.”

“He and I had a conversation before he left and they hadn’t told him who it was going to be yet, but he didn’t want it to be anybody else,” said Mike Parker, Luke’s brother. “He didn’t really want to be on the show if it was anybody else other than (Brown).”

“We were just watching and all the sudden he was the first one to come out and we were freaking out about it,” Hannah said.

And apparently the family was just banking on the new Bachelorette being Hannah. 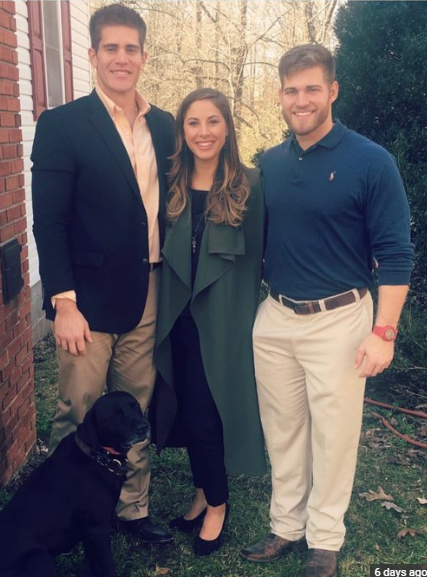 “We didn’t know that it was going to Hannah B., but we hoped it would be,” Hannah said. “Just because of how she handled herself … And they showed on the season, when the girls were at the house, they showed her a couple of times where she was reading her Bible, and writing in her journal and stuff.”

Luke is a very devout Christian so Brown’s devotion to Christianity was a key element in his crush on her.

Luke is a member at Christ Place Church.

Luke’s brother Mike said, “in the back of our minds, we knew Luke would be great for it. He’s a good looking guy, he’s very outgoing, he’s got a great personality.

“And I know I’m his brother and everything, but he’s the most genuine guy I know.”

Mike and Hannah breathed a sigh of relief when they saw Luke introduce himself to Hannah and the world for the first time.

“When I saw him on there — I can read my brother better than anybody — and I saw him being real, I saw him being Luke when he smiled, I saw the Luke everybody loves,” Mike said. “And when I saw that … I was able to take a deep breath.”