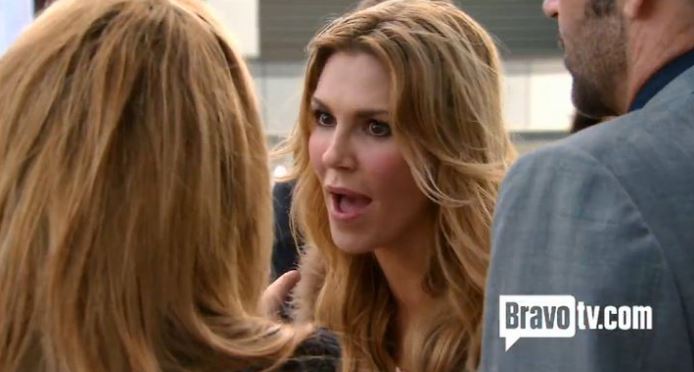 RHOBH lesbian escapades – could Adrienne Maloof be on that list?

I am really enjoying revisiting The Real Housewives of Beverly Hills in light of recent revelations about the lesbian throwdown between Brandi Glanville and Denise Richards.

And I am perseverating on the claim by Denise, that Brandi told her that she had slept with all of the Housewives.

We know at the very least that’s an exaggeration, BUT, that doesn’t mean there is not some truth to it.

It would not be unlike Brandi to brag about her conquests. Recall when she told Taylor Armstrong that she had slept with everyone in Hollywood? Again, an exaggeration, but surely there were some big names notched on her bedpost.

We also know there have been serious rumors that Brandi slept with Carlton Gebbia and Kim Richards in addition to Denise. So that is 3. Could there be even more?

Remember when Brandi came on the show she made out with Camille Grammer and tried to makeout with Adrienne Maloof the same night in Las Vegas?

Adrienne shut her down, but that doesn’t mean nothing happened off camera. Especially since Adrienne is insanely private about her life.

In rewatching the seasons (I am now on season 3) something about Adrienne is really setting off my gaydar.

Adrienne is not remotely affectionate with husband Paul. In fact she actually seems grossed out by him whenever he tries to engage with her in a romantic way.

She didn’t even want to hold his hand in Hawaii. When he tried to kiss her after he made a sweet romantic toast, she acted like she was kissing her brother.

B is for “butch”. Adrienne is pretty butch with all of her kick boxing activities.

The boyfriends. This one is what really triggered me. When I saw that Rebel Wilson was dating Jacob Busch, that was it for me. I had never considered that Rebel could be gay but Jacob is as gay as a 90s boy band.

And we know Hollywood is famous for arranging relationships for secretly gay celebs who don’t want to be outed. Didn’t we all know that Juliane Hough from 2010 to 2013 was a beard for Ryan Seacrest? And she recently came out. Some other very suspect arrangements: Shailene Woodley and Aaron Rodgers, Nick Jonas and Priyanka Chopra, and the list goes on and on.

Anyhoo, prior to dating Rebel, Jacob was dating Adrienne. The 29-year-old Budweiser heir was dating 58-year-old Adrienne. Seriously? What could these two have in common? The relationship was about as believable as Tom Cruise and Katie Holmes.

On season3 ep8 Brandi tells Kyle this about Paul and Adrienne: “You don’t know what they’ve done to me”

“There’s so much more that people don’t know about and I cant talk about” (this is after she had already spilled the beans about Adrienne’s surrogacy to the group…so what else is she not saying?)

“they’re not good people.  I know the things that I know and I don’t want them to keep coming at me because  I fire back and it can get ugly”…

On season3 ep19 Brandi tells LVP:: “I don’t think Adrienne is a happy person. I think her marriage is just a business arrangement.”

Brandi gives Lisa a look like trust me it’s officially a biz and not a romance.

LVP says “I dont think its a business arrangement. “

Brandi says “I do, trust me”

I do think there is a great chance that Brandi hooked up with Adrienne, but I also think Adrienne would have had Brandi sign several layers of NDAs about any sexual encounter. And I think Adrienne ghosted her, just like Denise did, which sent Brandi into a tailspin looking for revenge.

Personally, I think it’s awesome if Adrienne loves the ladies because she is smokin’ hot. And I also think it’s fine to have a beard. In fact, it’s kind of more fun that way.

Hopefully, one of these nights, Brandi will get wasted enough to spill the beans!

2 thoughts on “RHOBH lesbian escapades – could Adrienne Maloof be on that list?”