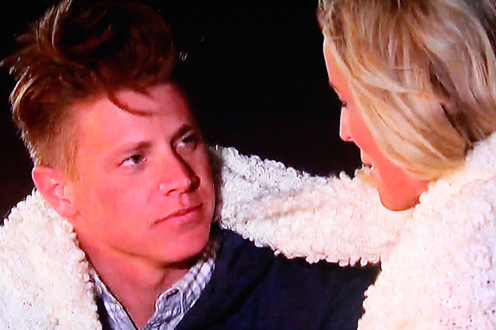 One of my favorite things about the Bachelorette is the array of “bromances” that evolve over the 9 weeks of filming. We know finalists Jef Holm and Arie Luyendyk, Jr., were super tight as members of the “Hipsters” on the show. In regards to the bromance with Arie Jef told reporters “He’s kind of a free spirit just like I am”. “It doesn’t really show a lot on the show, you know, how much of a free spirit I am. I’m just kind of portrayed as like ‘Jef’s the nice guy,’ but he and I, we are really similar. He’s a really good guy; I really like Arie.”

So what did Jef think when he heard his Bachelorette bro had “engaged in an inappropriate relationship with one of the show’s producers”–actually not exactly inappropriate but that’s one of our favorite Bachelor quotes of all time — See Jake Pavelka and Rosalyn — more like an appropriate-but-undisclosed relationship with show producer and Emily BFF Cassie Lambert:

“I didn’t find out until after I had gotten home and it was really interesting,” Jef said. “It was really weird to me because Arie and I had developed a really good friendship and communicated about everything. And it’s so strange to me because he would come back home from the hotel after going on a date, and he’d be like — we talked about it all the time — and he would be like, ‘Emily just feels like there’s something that I’m like hiding from her or something that I’m holding back, and I have no idea what it is.’ And obviously I had no idea that he dated one of the producers, so I was just like, ‘Well, what do you think it is?’ And he’s like, ‘I have no idea. I just get the feeling that she just doesn’t trust me or that there’s something up.’ And of course when I got home and I figured that out, I was just like, ‘Well, duh!’”  Amazing!!!
I love this insight into what goes on behind the scenes. This is one of the reasons the show is so amazing. The guys obviously become “bros” living together for 9 weeks so how do they negotiate the part where they are also vying for the same girl? Add to that the fact that contestants are stripped of their cell phones and don’t really have anyone else to confide in but each other. “I’m super into this chic (that you are also super in to) and I can’t figure out why she doesn’t seem to trust me what should I do?” The levels of amazing-ness are unreal. “You’re my bro and my biggest competition at the same time”! We love a serious juxtaposition here!

'The Bachelorette's' Jef Holm's "Steijum" tattoo: What does it mean?

Emily Maynard forgos the Fantasy Suites: Find out why