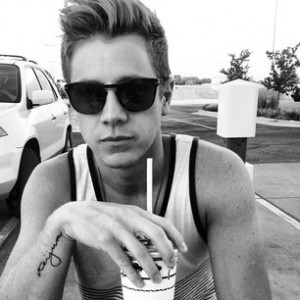 According to ABC’s pre-season bio questionnaire for Bachelorette Season 8 suitor Jef Holm, his “Official Tattoo Count” is: ONE. Now, because this season of The Bachelorette has been so G-Rated (aka not a hot tub was in sight until the overnight dates, when I let out a belt of GLEE when Emily climbed in to some steamy hot water with Sean Lowe in their “fantasy suite.” About damn time! Two of the main reasons we watch this show, ABC, are: 1) hot tubs and 2) helicopters!), we haven’t had the chance to see always-fully-clothed Jef’s skin enough to peep this mysterious tattoo count of one.

But, just recently, Jef tweeted this photo of him at In n Out Burger, which clearly displays his ink on the side of his wrist. But what does his tattoo say? And what does his tattoo mean? The tattoo is the scripted word: STEIJUM. A Google search of the word “steijum” reveals that it stands for a publishing company, Steijum Publishing, that’s based in St. George, Utah (Jef’s home town), and was established in 2011.

I can’t seem to find any information on what this publishing company has actually published, but we’ll keep digging and will post updates from our sleuthing here.

Here is what I believe, thanks to my friends on the Bach&Bachette Fans and Sleuthers forum: Steijum is a word created by Monte Holm, Jef’s dad, and used as the name for one of his publishing companies. It is made to unite/merge the names of his six children, namely Steve, Stephanie, Jef, Julie, Mike and Melissa.

So there you have it, folks! Jef with One F’s tattoo break down (so far!). If you discover any additional factoids about Jef Holm’s ink, please let us know in the comments section. Thanks!

3 thoughts on “‘The Bachelorette’s’ Jef Holm’s “Steijum” tattoo: What does it mean?”