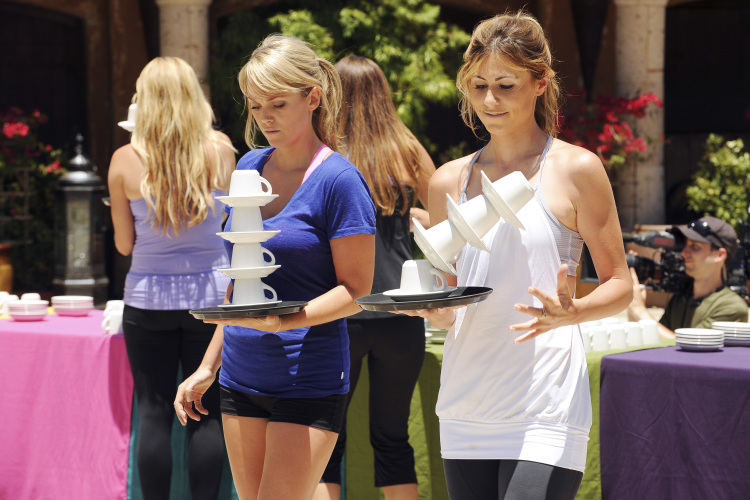 This week’s episode starts out with the return of Mr. Chris “Anger Management Issues” Bukowski. YES! That dude just acts like a completely ridiculous little kid when things don’t go his way. Two Chris Bukowski consistencies between The Bachelorette and Bachelor Pad that we witnessed this week were: 1) He definitely has some serious “don’t poke the bear” anger management issues (ridiculous fight with Ed; hiding under the covers like a pouty little angry kid) and 2) He likes to steal the person handing roses out (last time, it was Emily; this time, it was Tony) at the last second to try to persuade them to change their rose allocation choice whilst making everyone else roll their eyes and wait. Chris just needs to CALM DOWN!

Now, onto this week’s challenge: stacking tea cups and saucers on a tray. I did love that everyone was pointing out Blakeley’s unfair advantage in this challenge because she has experience as a VIP Cocktail Waitress….because VIP Cocktail Waitress is still once of our favorite occupation titles from these shows of all time. Chris’ comment on the matter took the (mean) cake when he said Blakeley has “worked at Hooters for the past 35 years.” Ouch!

I’m going to skip over Lindzi and Kalon’s date for just a moment to keep on the Blakeley Battering Train for a second here, because that girl really got raked over the coals with the mean comments tonight. Can we give the poor girl a break-ley? I mean, when she was headed out on her 1-on-1 date with Tony, the cutting comments continued, with barbs about her being trashy, with trashy tattoos, etc. Granted, she’s not the most angelic seeming character this franchise has ever seen. And I’m a bit surprised Tony is considering taking her home to his son (aka “Batman”) at some point [Note: rumor has it Blakeley is moving in with Tony in Oregon soon!], but, come on… this is a trashy TV show, so it’s a bit of the pot calling the kettle black with all of this finger pointing.

Onto Lindzi Cox and Kalon McMahon. As a long-time LA resident, I appreciated the fact that their date was on a creepy, closed off bridge over the LA River. Haha. Overall, I like that these two found each other. It’s nice seeing the otherwise douchey Kalon let his guard down and act vulnerable and lovey dovey with a girl. As far as Lindzi goes, she is one of the most awkward people I’ve ever watched on this show. She has such a nerdy, awkward way about her that is just really hard to watch. But, apparently these two are still together post-show and going strong, so YAY FOR THEM!

The final three situations from this episode to discuss are:

1) The Jaclyn and Ed Situation: It was so brutal hearing Ed talk about his non-relationship with Jaclyn in front of everyone (including Chris Harrison), and then seeing Jaclyn’s facial reaction to this news. We love Jaclyn! We gotta PUMP HER UP! I mean, it’s great that Ed was being honest (finally), but from the looks of it, Jaclyn was a bit snowed by him, and was led on to believe there was something more going on between the two of them. Ed, Ed, Ed…..come on, buddy!

2) The Erica Rose Departure Speech Situation: I could not believe that Erica brought up the uber hurtful Blake and Holly Situation while yelling at Michael during her departure. That was BRU-tal! And seriously cruel.

3) The Michael Stagliano and Rachel Situation: Well, folks…rumor has it that these two are not a post-show couple (unlike Lindzi and Kalon and Blakeley and Tony), so perhaps Michael’s premature departure from the show is why. Perhaps these two just didn’t have enough time to solidify their relationship in the Pad before being thrust into a post-show long-distance relationship? We will be watching for more clues about the downfall of the Michael and Rachel relationship…. It’s sad because we were really rooting for them!

Tony Pieper and Blakeley Shea are moving in together!